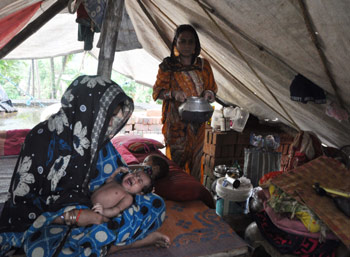 Odisha Channel Bureau New Delhi, Sep 3: Following the successive waves of flooding that struck Odisha since late July this year, the European Commission is providing €249,000 to help some of the worst affected communities meet their emergency needs.The humanitarian assistance will benefit over 25000 people living in the two districts of the State that have been hardest hit, Jajpur and Bhadrak, according to an official release issued in New Delhi on Wednesday.“These people have lost their houses, their belongings, and in many cases their sources of livelihood since the fields they work in are under water”, said Joao Cravinho, the Ambassador of the European Union in India.“This emergency aid will therefore specifically focus on cash transfers that will enable them to meet their immediate needs until the situation reverts to normality, as well as on emergency shelters and hygiene promotion for the most vulnerable”.The EU emergency assistance will benefit inhabitants of 20 villages located in the worst affected pockets of Jajpur and Bhadrak districts – mostly poor dalit families who were caught unaware by the floods as they had never experienced them before.The aid will be delivered primarily through direct cash grants or through cash-for-work programmes, a mechanism though which funds are channeled to beneficiaries in exchange for participating in community infrastructure projects or repair of shelters.The money will help families meet their most critical needs, particularly food, whilst speeding up the reconstruction efforts.Emergency shelter material and hygiene kits will also be provided to the most vulnerable families, and hygiene awareness campaigns organized in the communities.The project is being funded by the Humanitarian Aid and Civil Protection department of the European Commission (ECHO) through its Small Scale Response mechanism and will be implemented by Christian Aid, and international NGO which has a long established presence in Odisha.Odisha experienced three successive waves of flooding over the last month and a half, affecting over 3.6 million people across 13 districts.More than 60000 people were displaced and vast areas of agricultural land have been inundated, disrupting livelihoods and affecting the food security situation.The flooding has also caused widespread damage to shelters and safe water points, making local communities vulnerable to water-borne or vector-borne diseases.Access to safe drinking water is a major challenge.ECHO’s Small Scale Response fund is a global mechanism which allows ECHO to provide rapid funding of up to €300,000 for humanitarian aid in countries affected by natural and man-made disasters.