Odisha wakes up to its potato crisis

Odisha Channel Bureau Bhubaneswar, Aug 8: As flood situation remained grim in many areas of Odisha and potato vanished from the market at various places in coastal regions since Thursday, the Naveen Patnaik Government on Friday announced to provide potato to people through PDS outlets at Rs 20 per kilo in view of restriction on movement of the tuber from neighbouring West Bengal.Food Supply and Consumer Welfare Department Secretary Madhusudan Padhi told journalists here that they had about 30,000 quintals of potato stored at different cold storages in the State.Padhi, however, informed that the neighbouring state was yet to lift the restriction on the movement of potato loaded trucks. 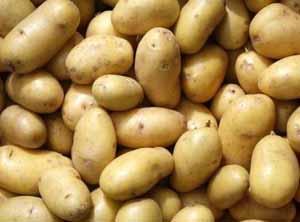 Food Supply and Consumer Welfare Minister Sanjay Das Burma said that the State government was not aware about the reasons behind the West Bengal government’s restrictions on the potato transportation though there was no restriction on the movement of trucks carrying other vegetables from West Bengal.He said that Odisha was expecting potato supply by NAFED (National Agricultural Cooperative Marketing Federation of India Ltd) in next two days.Meanwhile, chaos prevailed in the Odisha-West Bengal borders with activists blocking West Bengal-bound trucks from Andhra Pradesh.It may be noted that the Centre had asked Odisha Government in June itself to have adequate stock of potato and onion to meet any crisis, but no step was taken by the authorities concerned till heavy rains and consequent floods triggered panic buying of potato since Wednesday.As result, while people had to purchase potatoes at Rs.30 or Rs.40 per kilo on Wednesday no potato was available at many places in any shop including the Capital city of Bhubaneswar since Thursday.