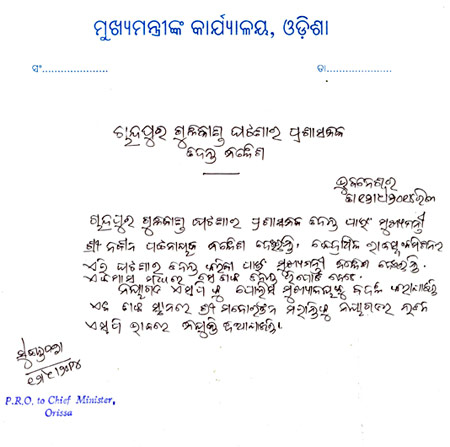 Odisha Channel Bureau Bhubaneswar, Sep 12: It sounds unbelievable but it’s true.A rubber stamp that the Public Relations Officer in Odisha Chief Minister Naveen Patnaik’s office has been using has not been changed till date though the name Orissa was officially changed to Odisha way back in November, 2011.The English rendering of the State’s name was officially changed to Odisha and that of its language from Oriya to Odia following the Presidential assent granted on November 4, 2011 to the Bill passed by Parliament.The photograph of a press release issued by the PRO to Chief Minister being published along with this report is a proof of the sheer negligence on the part of the Odisha Government.The press release with regard to Chief Minister Naveen Patnaik ordering an administrative inquiry into the police firing at Chandpur, which was e-mailed to journalists in Bhubaneswar on Friday evening, carried the impression of the stamp used by the Chief Minister’s Office.“P.R.O.to Chief Minister, Orissa,” it saidPeople across the State had celebrated after the Orissa (the Alteration of Name) Bill became an Act after being assented by the President nearly three years ago.Chief Minister Naveen Patnaik had congratulated the President for the historic decision.But the stamp still being used in his office tells a small story about a big blunder.