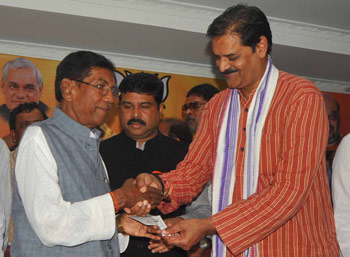 Odisha Channel Bureau Bhubaneswar, Sep 22: A day after former Biju Janata Dal Member of Parliament Rudra Madhab Ray joined the Bharatiya Janata Party, the party named him as its candidate for the Kandhamal Lok Sabha seat which is scheduled to go to the polls on October 15.The BJP has decided to field Ray with the aim to secure the support of the disgruntled BJD leaders and workers under Kandhamal seat to win the by-poll.Ray, who had been elected to Lok Sabha from Kandhamal on a BJD ticket in 2009, was denied the party ticket to contest the 2014 elections.He was subsequently suspended from BJD for anti-party activities.The BJP had on Sunday decided to make former Minister and senior leader Bijoy Mohapatra to head the party’s campaign committee for the forthcoming by-poll in Kandhamal.Ray is a close of Mohapatra as they worked together in the erstwhile Odisha Gana Parishad that was headed by Mohapatra several years ago.Two other major contenders for the Kandhamal seat – BJD and Congress – were yet to name their candidates.The last date of filing of nomination papers is September 26.