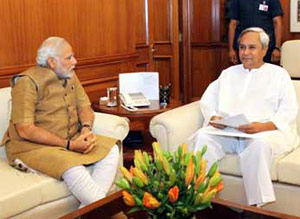 Odisha Channel Bureau New Delhi, Oct 6: Odisha Chief Minister Naveen Patnaik had no new demand to take up with Prime Minister Narendra Modi here on Monday evening.Among other old demands, Patnaik demanded that Odisha be granted special category State status to help it achieve development at a faster pace with more Central assistance.Patnaik also apprised Modi about the impact of the Polavaram irrigation project on some tribal-dominated pockets of Malkangiri district.The Chief Minister told journalists after the meeting that he also sought inclusion of Sambalpuri/Kosli and Ho languages in the 8th Schedule of the Constitution, and adequate funds for completion of ongoing railway projects in different parts of the State.Patnaik said that he further demanded a special package from the Centre for the Nabakalebara festival of Lord Jagannath next year and operation of international flights from the Biju Patnaik International Airport in Bhubaneswar.The Chief Minister said that the Prime Minister said that he will look into the demands and see what could be done.