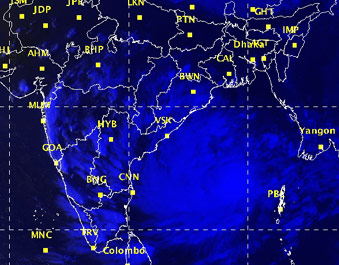 Odisha Channel Bureau Bhubaneswar, Oct 9: Cyclonic storm Hudhud over Bay of Bengal, which would hit the coast around Visakhapatnam on Sunday (October 12), will affect southern Odisha district sparing many of the coastal districts.The storm would also affect coastal Andhra Pradesh.“The severe cyclonic storm `HUDHUD’ over eastcentral Bay of Bengal moved west-northwestwards lay centred at 1430 hours IST on 9th October near Lat.14.0°N and Long 88.6°E, about 700 km southeast of Gopalpur and east-southeast of Visakhapatnam.“The system would continue to move west-northwestwards, intensify into a very severe cyclonic storm during next 24 hours.The system would cross north Andhra Pradesh coast around Visakhapatnam by forenoon of 12th October,” according to India Meteorological Centre.According to IMD, heavy rainfall would occur at isolated places in Odisha on Friday and heavy to very heavy rainfall at few places on Saturday with squally winds speed reaching 50-60 kmph gusting to 70 kmph.As sea condition off Odisha coast will be rough to very rough fishermen have been advised not to venture into sea and those who are in deep sea return to coast immediately.The southern Odisha districts that are likely to bear the brunt of the storm on Sunday include Ganjam, Gajapati, Rayagada, Koraput and Malkangiri. 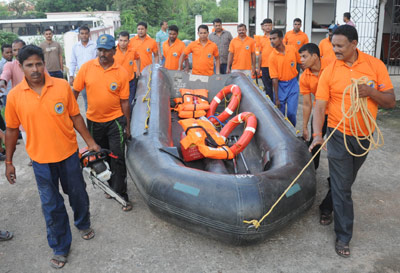 Meanwhile, the Naveen Patnaik Government shifted its focus south Odisha and directed the local administration in that region to stay fully prepared to meet any eventuality.The State government has stationed two units of Odisha Disaster Rapid Action Force at Berhampur and Koraput.Chief Minister also wrote a letter to Union Defence Minister Arun Jaitley to issue standing instructions to defence forces, especially Indian Air Force (IAF), to remain in readiness to extend support to the State for rescue and relief operations after the cyclonic storm Hudhud cross the coast.The defence units located in and around Odisha may be directed to provide all possible support to civil authorities for effective management of disasters, as and when any request to that effect is made by the State government, Patnaik said in his letter Defence Minister.