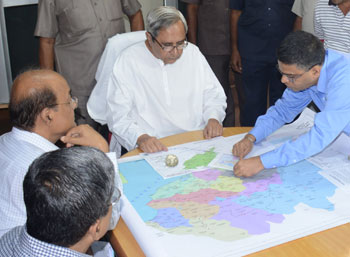 Odisha Channel Bureau Bhubaneswar, Oct 12: Severe cyclonic storm Hudhud made its landfall near Vishakhapatnam around Sunday noon causing major damages in north coastal Andhra Pradesh.Odisha had a narrow escape.Though widespread rainfall was experienced in coastal and southern districts of the State, no major damages caused by the cyclone were reported immediately.Even as the cyclonic storm with wind speed reaching 180 kmph was experienced in Visakhapatnam along with heavy rains, wind speed reaching 70 kmph was felt in southern Odisha region.The wind speed will come down by 50 per cent in 6 hours, and heavy rainfall will also decrease by evening and further decrease over the next two days.In Odisha, though a few hoardings and branches of many trees were damaged by Hudhud in Bhubaneswar, no major damage was reported from seaside villages of Ganjam district or Berhampur town till an hour after the storm crossed the Andhra Pradesh coast.Heavy rains continued over coastal and southern districts of Odisha as in coastal Andhra Pradesh. 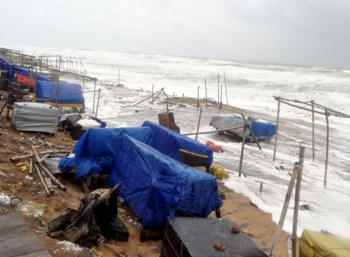 Odisha Chief Minister Naveen Patnaik said that the administration had evacuated over 67, 000 people from vulnerable areas in Ganjam, Gajapati, Koraput, Rayagada, Malkangiri, Puri, Kendrapada and Khurdha districts to 604 safe shelters of the State.Patnaik reviewed the situation in Bhubaneswar about an hour before the cyclone crossed north coastal Andhra Pradesh.The death of one person, however, was reported from Ganjam district.It was caused reportedly due to wall collapse due to heavy rain.The death toll increased to two since a girl was drowned in Kendrapara district on Saturday when a boat capsized during evacuation of people in coastal villages in erosion-prone Satabhaya area.One boy had gone missing in the incident.