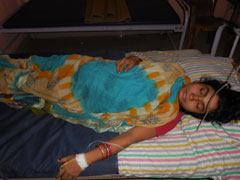 Odisha Channel Bureau Paradip, Nov 6: A 28-year old mother has delivered of a freak two-headed stillborn male baby at a private hospital in Jagatsinghpur district of Odisha on Tuesday.It was a very rare case of conjoined twins with one body and two heads.Such childbirth occur one-in-a-million cases.“It was a stillborn child.We conducted the delivery without surgery.We tried out level best to save the mother.Our effort paid dividends as the mother recovered and is out of danger, said senior gynaecologist Saroj Kumar Jena.There was an obstruction in the progress of delivery.But the delivery was successfully done without surgical operation.But the freak child was found out to be stillborn.Majority of such conjoined twins with one body and two heads are stillborn.On rare occasions, such babies survive hardly for a day or two, Jena, who conducted the surgery, said.The baby boy has two heads, two necks and two spines, but only one body, one lung for each head, two separate oesophagus’s and trachea, a single stomach and heart.Most of the vital organs are shared.The mother of the stillborn child, Debasmita Mohanty developed labour pain on Monday and was admitted in the hospital.Immediately after we admitted her, labour complication was detected.The mother of the stillborn conjoined child is undergoing treatment and is out of danger, said hospital sources. “I had left everything to God.I could not become a father as it was ordained by the almighty.She has survived.That is the greatest relief for me,” said Suresh Chandra Mohanty, father of the stillborn child.It was a case of genetic disorder.There was defect and disorder in organ genesis of the child, said gynaecologist Jena.Such a freak child birth is referred as ‘Dicephalus Dibrachius Parapagus’ (twins sharing a body from the neck or upper chest downward, having only two hands, two legs, and one set of reproductive organs) as per medical terminology.