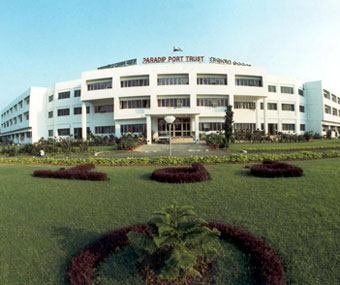 Odisha Channel Bureau Paradip, Dec 20: Hit by land shortage, Paradip Port Trust (PPT) authorities are mulling over the plan to relocate the civil township to an alternate adjoining site.With a series of ambitious expansion projects line up for refurbishment of Odisha’s lone major port, the relocation of the civil township has become imperative so that the expansion of port projects are not constrained by land paucity.Incidentally, PPT is country’s lone major port where the civil township is located in close proximity of the prohibited territory of the port.Nowhere the civil township lies on the close periphery of a major port.The contiguous urban settlement continues to emerge as a major impediment for the growth of the port on Odisha coast. “Technical experts’ views for the township relocation plan have been sought.If everything goes the right way, a modern civil township would replace the existing township.It would pave the way for expansion of prohibited area limits,” said a senior official of PPT.Land reclaimed from the existing township would come in handy to expand the core and prohibited area of the port.As major expansion projects are now underway to scale up the capacity of the Paradip port from the present 76 million tonnes per annum to 133 million tonne per annum by 2015, the major port badly needs more land to refurbish its infrastructure.“Side by side with infrastructure development of the port, we are laying emphasis on improving civic amenities of residents here and other users and dependents.For greater convenience of public, employees and those depending on the port township for livelihood, we have drawn up a comprehensive plan to expand core area of the port.At the same time, plans are afoot to shift the township.The move shift the township is to ensure that expansion programme faces no hurdles”, the official added.Till the relocation plan gets materialized, PPT would revamp the existing public utility projects like marketplaces, roads and public parks in the civil township, the official said. Port authorities had earlier requested the state government for allotment of over 600 acres of suitable land for the relocation of the township to meet with increase in cargo handling activity.Unless the township that adjoins the port is shifted somewhere else, an expansion programme is not practicable, said official sources.PPT officials said the need for the required land has been submitted with the state revenue administration and Jagatsinghpur district administration.Paradip is emerging as Odisha’s major industrial hub with industrial ventures like petrochemical and petroleum investment region and the POSCO steel project.Expansion of the port holds key to the industrial growth of the region.The process of land acquisition on the periphery of the port civil township has begun.However, official sources refused to say in clear terms whether that was meant for expansion of Paradip port.