Hopes renewed for commissioning of refinery project at Paradip 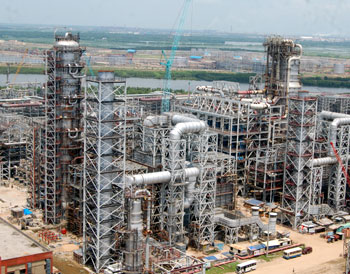 Odisha Channel Bureau Paradip, Jan 6: New Year has brought in its wake optimism of the commissioning of the much-awaited oil refinery project at Paradip.Hopes of Paradip’s emergence as a bustling industrial hub have been rekindled with State-run oil major Indian Oil Company announcing the commissioning of Paradip oil refinery in the first quarter of2015.Many here are of the belief that the proposed commissioning of India’s largest oil refinery worth Rs.34,555-crore of 15 million tonnes per annum capacity in 2015 year would herald a spell of socio-economic development.The refinery project of Indian Oil Corporation Limited (IOCL) at Paradip is expected to be completed by March this year.98 % of project work has come to completion.Construction of Atmospheric Vacuum Distillation Unit (ADVU), the mother on central component of the refinery, has come to an end.It has already been put under trial run before its full commissioning, Ramjee Ram, Executive Director, Paradip oil refinery project,“We have waited for almost a decade for the refinery to come up.It is gratifying to note that the much-awaited project is finally seeing the light of the day.Everybody here nurture the fond hope that project would usher in economic growth and would generate massive employment avenues both direct and indirect for people of Odisha.People eagerly wait for its commissioning,” felt a resident of Paradip, Ram Chandra Ram. As uncertainty looms large over country’s largest FDI Posco steel project near Paradip, the commissioning of oil refinery holds the key to development agenda of the region.As many as 35,000 to 40,000 people were engaged in the project when the work was in full swing.The trend would continue as several ancillary projects are queued up in the petro-chemical hub.Both the skilled and unskilled manpower would reap benefits in the process, felt former Lok Sabha Member Pravat Kumar Samantray.“I am leading a decent life through my transport business.I had availed of bank loan to own a truck in 2011.Now I have four trucks.All the trucks are engaged in refinery project work sites.The trucks are not going to stay idle as massive construction works are going on in the area,” remarked a trader from Bhootmundei, Satrabrata Behera. The project was announced in March 2006, with an initial installed refining capacity of 9 million tonnes per annum.Later its capacity was enhanced to 15 MTPA.The 15 million tonnes per annum refinery project is designed to operate on a broad basket of crude oils, including cheaper, high sulphur and heavy grades and is configured to perform with high energy efficiency, claimed oil company officials.“The Indian Oil Corporation Limited’s refinery project and various other ancillary petro-chemical projects lined up for establishment would usher in a new chapter of development in Odisha.It will lead to massive employment avenues for people.IOCL has also resolved to engage local people and job-seekers from various parts of the state,” said Executive Director, Paradip oil refinery project, Ramjee Ram.Side by side with refinery’s commissioning, Rs 3,150 crore worth polypropylene unit, Ethylene Derivative Plant at an estimated cost of nearly Rs 4000 crore are lined up for construction.The oil refinery complex would become a major petro-chemical hub.These units apart from the oil refinery project would act as catalyst in the socio economic development of the state, told oil company officials.