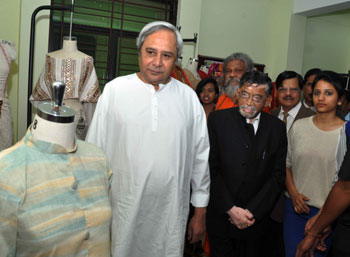 Odisha Channel Bureau Bhubaneswar, Jan 23: A national workshop on `Promotion of handloom with fashion’ under an event christened `Design Sutra’ was held at the National Institute of Fashion Technology-Bhubaneswar on Thursday.The workshop was inaugurated by Odisha Chief Minister Naveen Patnaik.Among other who attended the workshop include Union Textiles Minister Santosh Kumar Gangwar, Union Petroleum and Natural Gas Minister Dharmendra Pradhan and Odisha Textile Minister Snehangini Chhuria.Patnaik expressed happiness that NIFT has integrated the ‘Craft Cluster Initiative’ into its curricula that allows the students to work in collaboration with the artisans and weavers from different geographical areas of the country.“I am sure that this will help in exposing the students to the challenges faced by the sector and in introducing new designs, techniques and materials for benefit of the weaves and artisan community,” said Patnaik.Observing that the Handloom and handicraft of Odisha not only form an integral part of the rich Indian culture and heritage but also are widely appreciated all over the world for its exquisite design, beautiful colour combination and skill, Patnaik said he was happy to know that NIFT has initiated action for bringing the handloom weavers and the fashion designers together.“The ancient rock-cut caves and beautiful stone carvings engraved in the temples of Odisha provide a glimpse of the rich tradition of crafts, art and sculpture of Odisha.Our Ikat design, stone carving, wood carving, silver filigree, applique, patta painting, terracotta, dhokra casting, bell metal works, tribal painting etc.have earned appreciation world over and hold considerable promise for economic empowerment of people of the State,” he said.NIFT’s young talented students participated in a competition `Design Sutra’ organised in various categories where they produced diverse collections and displayed in the form of an exhibition.Design Sutra envisages bringing the designers and the handloom weavers together for reinventing handloom with fashion, infusing new ideas for producing a wide range of products as per the liking of the customers.Gangwar spoke about the initiatives taken up by the Textiles Ministry including setting up Textile Parks and incubation centres.He also announced that Ministry of Textiles had announced grant of Rs.10 crores for world Raghurajpur Craft village for development of a tourist destination centered on the patachitra artists.Gangwar requested Patnaik to allot 3 acres of adjoining land to NIFT for setting up of an incubation centre where young entrepreneurs would be able to setup their units for making fashion products.He urged the State Government to submit a proposal for Integrated Textiles Park, guidelines of which had been modified for meeting the specific requirements of the state governments.As no park has been sanctioned for the State, he suggested that Government of Odisha should submit a proposal as per the guidelines.A workshop involving the major stakeholders such as representatives from the industry, weavers and artisans’ community, designers and academia was held in the afternoon.The event ended with a fashion show held in the evening to showcase the garments made out of handloom fabrics by the students.