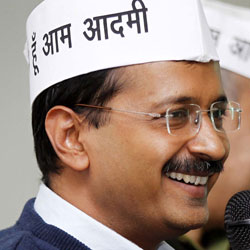 Odisha Channel Bureau New Delhi, Feb 10: Aam Aadmi Party (AAP) is set to rule Delhi again.The party has won as many as 67 of the 70 Assembly seats registering a historic victory.The BJP has been decimated with just three seats, while the Congress has scored zero.AAP leader Arvind Kejriwal, who led the party to a landslide victory, will take oath as the Chief Minister of Delhi again at Ramlila Maidan on February 14.Interestingly, the AAP leader had resigned as Chief Minister of Delhi on February 14 last year after remaining in power for 49 days.Kejriwal emerged victorious the New Delhi constituency by defeating BJP’s Nupur Sharma by a huge margin of 31,583 votes.BJP’s Kiran Bedi, who was contesting from the party’s `safe seat’ Krishna Nagar lost to S.K.Bagga of AAP.While AAP bagged 54.3% votes, BJP secured 32.2%, and Congress 9.7%.Slogans like `AAPkiDelhi’ and `5SaalKejriwal’ were raised across Delhi as Kejriwal came out with his family members to thank the people for extending their support to AAP.The Assembly elections were held in the national Capital on February 7.A total of 673 candidates contested for the 70 seats in the Delhi Assembly. 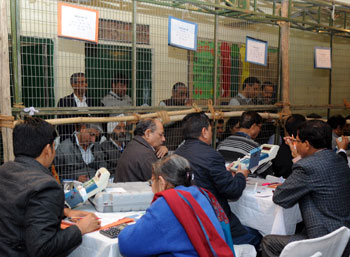 Prime Minister Narendra Modi and BJP president Amit Shah had led the BJP campaign by fielding Kiran Bedi.But party fared poorly despite the fact that it had bagged 31 of the 70 seats in Delhi in 2013.“The outcome of the Delhi Assembly elections has come as slap on Prime Minister Narendra Modi’s face,” said a political analyst.“The communal agenda of the BJP has been rejected by the people of Delhi,” opined a Congress leader.A record voter turnout of over 67.08% was recorded in the Delhi Assembly elections that went off peacefully on February 7.The voting percentage was 65.6% in the last Assembly elections in Delhi.The outcome of the polls has proved all the exit polls wrong to a great extent.The landslide victory for AAP comes exactly one month after BJP expressed confidence of forming the government in Delhi.“People of Delhi have rejected the Aam Aadmi Party (AAP).We will see very soon in the results of Delhi elections that BJP would be given the mantle of governance and AAP would be routed,” BJP spokesperson Sambit Patra had told journalists in New Delhi on January 10.