Odisha Channel Bureau Bhubaneswar, Feb 13: Third international conference on Buddhist Heritage of Odisha was inaugurated by Chief Minister Naveen Patnaik here today.The three-day conference .is being attended by many professors from Japan, University of Delhi, Banaras Hindu University, Lucknow University together with tour operators from Delhi and Banaras along with scholars and tour operators of Odisha.A book titled `Excavations at Radhanagar’ was released at the inaugural session. 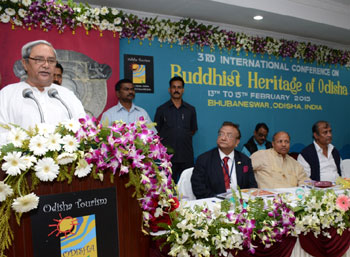 The programme has been divided into three sessions on first day – interaction and presentations on Buddhist sites of India and Odisha, tourism potentials of Buddhist sites in Odisha; and case studies and market modules will be discussed and an action plan will be prepared.In the evening at 6 pm, there will be a cultural programme at Rabindra Mandap.The cultural programme where an audio CD `Deha Videha’, the songs of medieval Buddhist monks will be released.The song is composed by renowned singer Sasmita Das who will sing the song live.The song is written by Haraprasad Das. Next, the Sri Lankan cultural group will perform to mark the occasion.The second day will be a field visit to Lalitgiri, Udayagiri and Ratnagiri – the Diamond Triangle to see the Buddhist remains that speak volumes about the great cultural background and carry forward the message of cultural integrity.There will be an exclusive session for the tour Operators on third day which will help the tour operators to bring tourists.There will be an exclusive photo exhibition on the Buddhist Heritage of Odisha organised by Odishan Institute of Maritime and South East Asian Studies (OIMSEAS) in the conference venue which high highlight the recent discoveries and the glimpses of Buddhist Heritage.Odisha has a repository of Buddhist art and heritage.The glimpses of materials remains can be seen from the various Buddhist sits spread over the state.Buddhism – the great religion had its origin in India about 2600 years back, sometime in the 6th century BC.