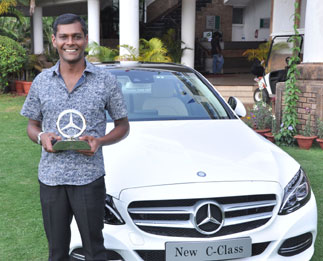 Odisha Channel Bureau Bhubaneswar, Feb 13: Satyajyoti Mohanty carded a net score of 72 at Bhubaneswar Golf Club to secure his spot in the National Finals of the 15th annual edition of MercedesTrophy India today.The MercedesTrophy currently in its 15th edition in India will cover 26 days of competitive amateur golfing action in 14 cities engaging 2500 golfers making it larger than ever before.It is tournament that redefines sports, exclusivity, entertainment and glamour all values the Mercedes brand identifies with.Today, it drives over 60,000 golfers from 60 countries over 600 tournaments annually.“I am very happy that MercedesTrophy has come to Bhubaneswar this year.The course was playing a bit tough today and the greens were faster than the usual speeds.Golf is an unpredictable game and I am glad I managed to win today.I will now try my best to win the National Finals as well,” said Mohanty. Satyajyoti Mohanty from Bhubaneswar joins 21 other national finalists who have already qualified from Bengaluru, Coimbatore, Chennai, Pune, Ahmedabad, Mumbai, Hyderabad and Jaipur.Three winners from the national finals in Pune will participate in the MercedesTrophy World Finals in September at Stuttgart, Germany against winners from all over the world.In the coming weeks, the tournament will move to Chandigarh, Kolkata, Delhi and Lucknow for qualifying rounds before the India leg culminates at the National Finals on March 25-27 in Pune.Each venue of the MercedesTrophy will hold Golf Clinics conducted by leading professional golf instructors in order to further expand the reach of the game.