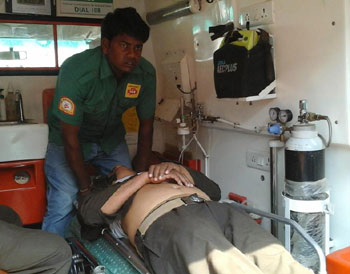 Odisha Channel Bureau Kendrapara, Feb 18: Four forest personnel were injured today as an angry mob went rampage and attacked the officials at Chakroda village near Kendrapara to protest against wild boar menace in nearby villages.The injured officials, according to police officials, were Ashok Jena (forest range officer), Dillip Champatiray (deputy forest range officer, Umesh Barik (forester) and Pradeep Bhuyan (forester). The rogue wild boar on rampage had killed a man and had injured at least six persons on 13 February in an agriculture field in Hatabanapur village under Derabish police station jurisdiction.Ironically, the village areas located far away from the forest areas had never encountered vandalism wild animals in the past.The animal had reappeared again today injuring a local resident when the exercise was on to capture the animal.This enraged the panicked people.Later they launched attack on forest personnel engaged in the exercise to catch the animal.The mob ransacked a vehicle that was hired by the forest department, said forest officials.Angry villagers staged road blockade near Balia junction paralyzing the vehicular traffic on the busy Cuttack-Chandballi state highway.As man-wildlife conflict has reached a flashpoint in Hatabanapur, Baspur and Chakroda villages, authorities are in a spot of bother to drive away the intruder.The animal has been playing hide and seek since past five days.The forest officials do not favour the killing of the animal.Besides it would be an offence under wildlife law to kill the wild boar as it has not been proclaimed as a rogue animal.Caging the animal by net is also quite a task.Taming the animal by the use of tranquilizing bullets is the sole option left with the forest personnel.Driving away the animal is destined to trigger further trouble as it may stray into urban areas of Kendrapara Township.