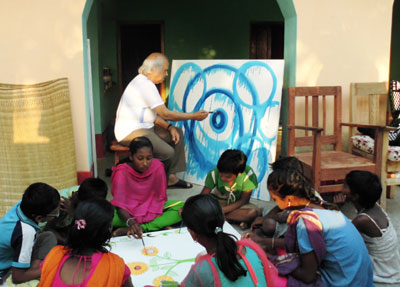 Odisha Channel Bureau Jajpur, Feb 23: Profound attachment towards his ancestral village has prompted an NRI to organise a unique festival in London to showcase the art and culture of his birthplace.The sleepy and non-descript Nanpur village in Odisha’s Jajpur district is well on its way to global exposure, thanks to heartfelt endeavour of 79-year-old London-based architect Prafulla Mohanti. Mohanti, also a litterateur of painter of repute, said “I have decided to organise “Nanpur festival’ in London during June next.The festival would be funded by me.It is an attempt on my part to put my village on spotlight.Whatever I am today, this is because of my rural upbringing.I owe my deep gratitude to my village”. Mohanti has authored ‘My Village and My Life’, ‘Changing Village’, ‘Changing Life and Indian Village Tales’ and won appreciative gestures from various quarters.His ancestral village and lifestyle, art and culture figured prominently in all of his books. “Last week, I organised cultural festival in Nanpur.It evoked considerable enthusiasm of local residents.Children and college going boys and girls took active part in the festival.Inspired by the success of the fair, I have resolved to take it to London, where I have been living for nine months in a year,” Mohanti said.Local talents in art, culture and dance would be flown to London for stage performance, he added. Mohanti has been living in 20 Sussex Street, London.Still, the rustic purity lifestyle of native village is deeply etched in his memory.“I pay visit to Nanpur every year unfailingly.I spend at least three months in the village.It gives me immense joy to remain in the lap of ancestral village,” he added.