Ornaments and Attire – Pride of Kashmir

By Sunil KoulThe valley of Kashmir in addition to its natural and beautiful munificence has been narrated abundantly by its poets and singers finding its place as a happy amalgamation of various attitudes, ways of life and culture.The assimilative propensities of the land and the people have evolved towards a unique philosophy of life in which the ever-rejuvenating sterling rudiments of every faith have not only found their due place but also prominence.Kashmir is not only known as a ‘Paradise on Earth’ but also a heaven of human values taken as a distinction recognised throughout the globe despite practising different faiths and values.The essence of Kashmir is defined by its rich culture and its warm people. It is equally known for the magnificent ornaments and dresses worn by its people.Ornaments in the valley are not worn for their intrinsic value and beauty alone but for religious reasons as well.The beautiful golden ornament worn by married Kashmiri Pandit women known as Dej-Hor is an important example. 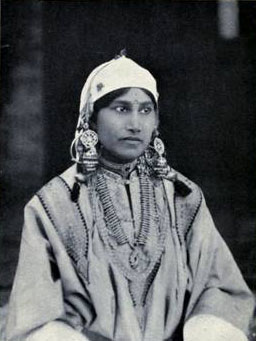 OrnamentsOrnaments in Kashmir are generally made of gold but sometimes precious stones like Opals, Carbuncles, Sapphires, Turquoises and Agates are also studded in the formation and design to enhance the appeal.Though most of these gemstones are brought from outside the region, Emeralds, Sapphires, Agates and Amethyst are indigenous and found within the state of Jammu & Kashmir.Kashmiri lapidaries are very skilful in their trade and need to be praised for the delicacy and details of their workmanship.The enchanting beauty of Kashmir finds expression in all its arts and crafts.The design on the ornaments are distinct and easily distinguishable from other parts of world. Nature finds its place in the design of this miniature art form.Almonds, Chinar leaves and birds like Myna and Bulbul are prominent.The goldsmith in Kashmir loves his work and works deep into the night to make the item a thing of beauty.Interestingly, the shape and form of most of the ornaments worn by Pandit and Muslim ladies are similar to a great extent.Some of the principal ornaments worn by Kashmiri women are given below:-Jiggni and Tikka are worn on forehead and generally are triangular, semi-circular and circular in shape.These are made of gold and silver and are fringed with hanging pearls and gold leaves.The ornaments of ear namely Atta-Hor, Kana-Door, Jumaka, Deji-Hor and Kana Vaji are studded with turquoise with a fringe of hanging gold leaves and balls.Kana-Vaji is also an ornament of ear studded with stones of different colours with a fringe of small pearls and Jumaka that is a ball shaped ear-ring.As mentioned earlier, Deji-Hor is an indispensable ornament for married Kashmiri Pandit women who wear it all the time as a mark of wedlock also known as ‘Suhag’.Atta-Hor hangs over the ear of the Kashmiri Pandit married women on either side of the head and is connected by a golden chain running over the head.Kana-Door, another ornament of the ear is worn mostly by the young girls.These ornaments are made of gold and silver and are studded with red and green stones or pearls.Heritage Kashmir DressesThe traditional dress of Kashmir is renowned for its embroidery and intricate designs that reflect the rich of the culture and landscape of the region.The attire in Kashmir found similarities with that of Arabia, Persia and Turkistan.It is believed to have been introduced by Saiyed Ali Hamdani in the reign of Sultan Sikandar.The Kashmiri Pandits of the Kashmir Valley too had adopted it.The lower portion of the body was covered with wide trousers called Shalwaar of Persian origin while the upper portion had a shirt called Kamiz with full sleeves.Over this was a short vest coat which was called Sadri.The outer robe was called Chogha and descended to the ankles.It had long loose sleeves and round the waist was a girdle.The head-dress consisted of a small close-fitting cap covered with a cloth.This formed the turban.On festive occasions, silk was worn.Such a dress sense was prevalent among the rich and the wealthier sections of the society.The dress for the poorer sections has not changed since the medieval times.Men put on a Skull-cap over their shaven heads and did not wear turbans.They cover their bodies with a long loose large-sleeved woollen garment called Pheran, open from neck to the waist and falling down to the ankles with a belt round the waist.The footwear consisted of shoes made of grass called Pulharoo.Some wore sandles made of wood called Khraw.The dress of women was almost the same as that of a man except that they had a fillet on their forehead and above it was a mantilla which fell from the head over the shoulders.The head dress of the Kashmiri women was called Kasaba.The Kashmir Pandit women too used Kasaba but they called it Taranga which was tied to the hanging bonnet, falling to the heels from behind.Dresses in contemporary times The dress in Kashmir has presently changed altogether.Like many other cultures and societies, Kashmir too has adopted the modern western ways of living.In spite of this intrusion, the Pheran is still worn by all sections of the people especially in winters to get rid of the chill and hostile weather conditions in region.A Kashmiri usually feels delighted and always extracts pleasure by wearing the Pheran made up of a thick woollen fabric for winter and another one made up of cotton for the summer.This dress has now become popular among the non-residents as well.The Pheran is gaining immense popularity among the visiting tourists that usually buy this dress that has been seen finding its place even in many recent bollywood movies of our film industry. A Kashmiri feels proud to associate himself with the unique legacy and identity of his land.Even the majority of the Kashmiri Pandits now putting up outside Kashmir in the other parts of the country have not forgotten to use their traditional dress.Most of them still wear the beautiful Kashmiri ornaments.One needs to keep the fact in mind that the cultural identities and the traditional values hardly die down.This stands true for one and all.(PIB Features)Sunil Koul is Media & Communications Officer at PIB Jammu