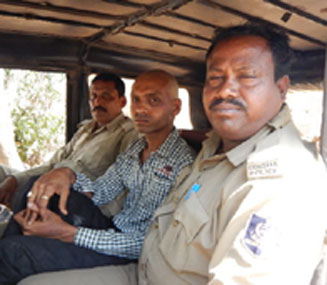 Odisha Channel Bureau Kendrapara, Mar 24: A 25-year-old man who had abducted a local girl was meted out instant punishment on orders by village elders in far-flung Barakandha village under Mahakalpada police station jurisdiction of Kendrapara district.The accused Jitendra Sethy who had allegedly kidnapped the village girl under false promise of marriage was caught by the local people.The angry people beat him up and tonsured him.Later they paraded him semi-nude.Locals had hatched a plan to apprehend him.They had asked him to come over to a pre-determined spot in the village by calling him over cell phone.The unsuspecting man was swiftly intercepted. Informed of the incident, police rushed to the village and the accused was rescued from the custody of local people.As police intervened, people handed over the accused today.Offender Sethy was later remanded to judicial custody under various Sections of Indian Penal Code, according to Mahakalpada police station Inspector Padarabinda Tripathy.