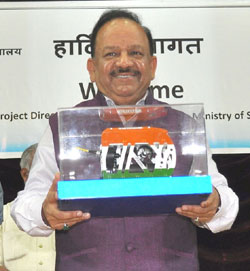 Odisha Channel Bureau New Delhi, Mar 25: Union Minister for Earth Sciences and Science & Technology Harsh Vardhan today dedicated to the nation an indigenously developed remote-controlled Polar vehicle which would reach where no human can dare to go.It will be deployed in the extremely harsh Polar Regions and will be remotely operated by our scientists at our base in Antarctica.The Minister said that the results of its findings will contribute vastly to mankind’s understanding of climate besides enhancing our capability to predict the Monsoon”.He was speaking after a visit to the National Institute of Ocean Technology (NIOT), a part of the Earth System Sciences Organization (ESSO) in Chennai this evening.Its successful development by ESSO-NIOT signals the beginning of a process of both self-sufficiency and entry into the highly sophisticated field of Remotely Operated Vehicle (ROV) engineering which has hitherto been dominated by the western powers, Harsh Vardhan said.“We have taken the polar plunge.PROVe and its subsequent versions will enable us to understand the Polar influence on ocean currents affecting the movement of Monsoon winds on which much of our economy depends”, he added.After years of work based in Dakshin Gangotri (Antarctica), Indian scientists have discerned a clear connection between the thermohaline circulation that originates in the North Atlantic and southern Arctic and the Monsoon.It is a major force that drives not only the oceanic circulation but also regulates the global climate.Harsh Vardhan said, “Monsoon prediction and reading of pattern will become easier in the future.It will measure parameters like ocean currents, temperature and salinity in the Arctic.A moored ocean observatory has been set up in the Arctic in collaboration with the National Centre for Antarctic and Ocean Research (NCAOR) in 2014.” The Minister said, “The ESSO-NIOT team that participated in the 34th Indian Scientific Expedition to Antarctica (ISEA) successfully deployed PROVe in the Priadarshini Lake located on the Schirmacher Oasis in Antarctica which is the source of water for Maitri, India’s second base in the icy continent.” He added that PROVe’s systems have been integrated with Conductivity, Temperature, Dissolved Oxygen sensors and Irradiance meter. PROVe was later deployed near ice shelf from the ship at the India Bay in Antarctica at a depth of 62 metres. Further explorations and data analysis are in progress.The country, he said, is on track with the objective of developing reliable technology to solve the varied technology problems associated with harvesting living and non-living resources in the Indian Exclusive Economic Zone which makes up about two-thirds of the land area of India.ESSO-NIOT has forged collaborative agreements with leading world institutions like JAMSTEC, Japan, and Woods Hole Oceanographic Institute (WHOI), USA.Under the Ministry’s Monsoon Mission program, ESSO-NIOT is part of an Indo-US initiative involving the participation of several institutions.This group is studying the science behind the monsoonal events of Bay of Bengal using both Indian and US research ships using special equipment.The results are very promising from the point of view of enhancing insights into air-sea interactions.Harsh Vardhan interacted with scientists and technicians of ESSO-NIOT and was briefed on the progress of research on coastal zone management.He urged them to keep in mind environmental concerns.