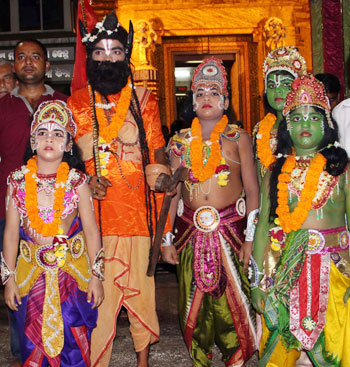 Odisha Channel Bureau Puri, Mar 29: The eleven-day-long annual open air enactment of Ramayan popularly known as `Sahi Yatra started in this holy town on Saturday evening on the occasion of Ram Navami, the festival celebrating the birth of Lord Ram.Thousands of artists of the city used to participate in this grand open air theatre every year.Sahi Yatra begins on Chaitra Astami with birth of Lord Ram.The Yatra would conclude on Baisakh Dwitiya with Lord Ram Ravana.Different roles of different characters of Ramayan were entrusted to the youths of different Sahis (lanes) and members of the schools of martial arts in different localities for the respective days to perform different episodes of Ramayan.On the commencing day Kalikadebisahi presented the lead role of Lord Rama from his birth.The youth playing Lord Ram’s role went in a procession to the Lord Jagannath temple and offered prayers.He was accorded permission of the Lord (Ajnamallya) to proceed with the play.For that a complex set of rituals were performed in the temple.Youths of various Sahis and Jaaga Ghars (schools of physical culture) stage important episodes of the Ramayan on the streets every day.They visit other lanes to demonstrate their martial skills along with the play.In return, as per the schedule another Sahi presents with another episode.The entire play is planned, directed and streamlined in a systematic manner.The characters of Ramayan were allotted to various Sahis and Jaaga Ghars in accordance with the importance of the role and capacity to make it more lively and vibrant.