Odisha Channel Bureau Puri, Mar 29: The Banajag Yatra team embarked on the Daru search mission from the Simhadwar of the Shri Jagannath temple this evening, marking beginning of the process for the Nabakalebara festival of the deities.The last Nabakalebara festival of Lord Jagannath, in which present idols of the deities are replaced with new ones, was celebrated in 1996.The temple priests handed over four Ajnamallyas (permission of the deities) to the four chief servitors of the four deities Lord Jagannath, Balabhadra, Subhadra and Sudarshan. 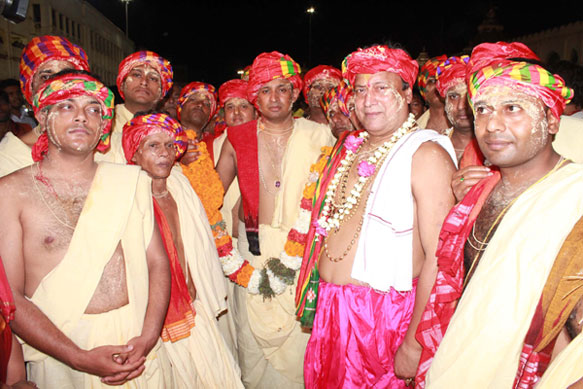 The Pati Mahapatra, one of the senior most temple servitors, decorated the four with traditional Sarees fashioning on their heads (turbans).In a ceremonial procession of flag bearers, playing of cymbals and blowing of conch shell the Daitapatis came out of the temple at about 7.20 pm.They marched towards the Jagannath Ballav mutt where they would live for 36 six hours.On the way Rajguru of the Gajapati King handed over them the Sankalp Gua (betel nut) to the Daitapatis as a symbol of entrustment of this religious job.Facilities in the Jagannath Ballav Mutt have been developed to house the Banajag team comprising 130 Daitapatis and their support staff.A newly built podium in the mutt was inaugurated by local legislator Maheswar Mohanty during the day.The Jagannath Ballav mutt authorities led by its chief Bhaktacharan Das and Jagannath Bastia received the Banajag team.They would be provided Mahaprasad in dinner and breakfast in the morning and then would be served cooked food for lunch.On Tuesday midnight after taking dinner, the Banajag team would leave for Deuli mutt at Kakatpur.Elaborate security arrangements have been made by the police.District Magistrate Aravind Agarwal, Superintendent of Police Asish Kumar Singh and temple Chief Administrator Suresh Chandra Mahapatra along with their staff were present.In a press release issued to the media today, Mahapatra said the location of the Darus would be announced one by one with Sudarshan followed by Subhadra, Balabhadra and in the end of Lord Jagannath by the temple administration after the Daitas give in writing to temple.Mohapatra urged the Banajag team not to disclose the locations before they submit their report to the temple administration in this regard.

One Response so far.