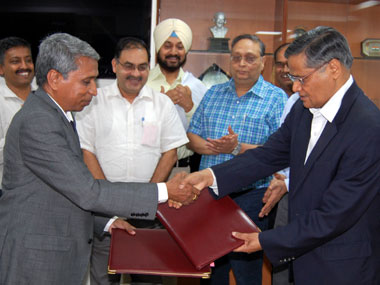 Odisha Channel Bureau Bhubaneswar, April 3: National Aluminium Company Limited (NALCO) has signed a memorandum of understanding (MoU) with the Ministry of Mines, Government of India regarding financial and non-financial targets for the financial year 2015-16.The MoU was signed between Anup K Pujari, Secretary, Ministry of Mines and Ansuman Das, CMD of NALCO in the presence of R.Sridharan, Additional Secretary and other senior officials of Ministry & NALCO in New Delhi two days ago.As per the MoU, the net operating sales turnover target has been fixed at Rs.8,488 crore.As regards physical performance, NALCO has set an annual production target of 68.25 lakh tonnes of bauxite, 21.80 lakh tonnes of alumina, 3.80 lakh tonnes of aluminium and net power generation of 6009 million units.Regarding new initiatives, the proposed major milestones would be establishing solar power project of about 15 MW and exploring an overseas smelter plant based on cheap power.Further, NALCO has given emphasis on reduction in electrical energy consumption for its Refinery and Smelter plant and accordingly targets have been set.According to an official release, the company has set target for adopting ISO 27001 Certification for IT Infrastructure.As part of its Corporate Social Responsibility activity, NALCO has committed for construction of toilets in school of peripheral villages of Angul and Damanjodi sector under “Swachh Vidyalaya Abhiyan”.NALCO achieves highest ever turnoverNALCO has completed another good year in 2014-15, with reference to physical and financial performances for the year 2013-14.During the year, the company has achieved highest ever gross turnover of Rs.7774 crore (provisional) against Rs.7024 crore achieved last year and previous best of Rs.7247 crore achieved in FY12-13.Export earning has been Rs.3307 crore in 2014-15 against Rs.3719 crore earned last year.Besides, NALCO has generated 181 MU of wind energy during the year by operation a 50.4 MW wind power plant at Gandikota, Andhra Pradesh and another 47.6 MW plant at Jaisalmer, Rajasthan.During the year, the company commissioned 260 KWp Rooftop Solar Power System at Corporate Office and Township, Bhubaneswar.167 kilo unit solar energy has been generated during the year.