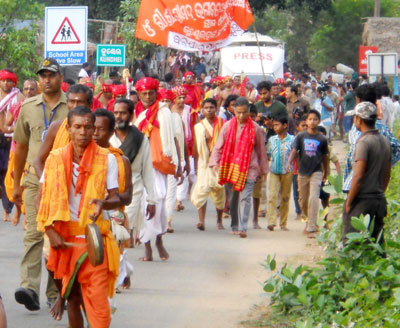 Odisha Channel Bureau Puri, April 3: The Banajag team from Puri reached the Mangala temple at Kakatpur today as part of the process relating to the Nabakalebara festival of Lord Jagannath.The Daitapatis went in a procession from Deuli mutt to the Mangala temple.The priests of Mangala temple performed `Majana’, a special bhog offered to the goddess while the Shrotriya Brahmins of the Banajag team performed Saptasati Chandi (to appease the goddess) in the temple complex.The priests allowed Daitapatis to go into the sanctum sanctorum of the temple to offer prayers.The Daitapatis recited Swapnabati Mantra to appease the goddess of dreams to show them the divine vision about the location of the holy Neem trees.A complex set of religious ceremonies were performed and in the evening the Daitapatis returned to the Deuli mutt where they would wait for the divine instructions.They were scheduled to stay in the mutt for about 11 days before embarking on their journey to search the Neem trees.A large number of devotees from the nearby villages came to witness this rare religious ceremony.Police had a tough time to control the crowd.Earlier in the day, at about 10 am the priests of Ma Mangala temple in response to the Chitau of Deula Karan came in a procession to the Deuli mutt with the Ajnamallya of the goddess and invited Daitapatis to Mangala temple for observance of several rituals prelude to the search of Darus.The Banajag team which began their barefoot journey to Kakatpur from Puri on March 29 arrived on at Deuli mutt on April 2 at Kakatpur covering about 65 km.Soon after their arrival the Deula Karan issues a Chitau to the priests of Mangala temple to follow the Nabakalebara schedule.As per the temple almanac, the Nabakalebara or replacement of old idols of the deities with new one takes place when the year consists of two Ashadha months.This year the leap month conjunction of Ashadha happened warranting the observance of the Nabakalebara ritual of the trinity and Sudarshan.The conjunction came after 19 years.The last Nabakalebara ritual was held in 1996.The presiding deities of the Shri Jagannath, his Balabhadra and sister Subhadra along with Sudarshan were to take new bodies popularly known as Nabakalebara.For that the Daitas a special clan from Sabar tribe known as body protectors of the deities do the job.The deities whose bodies would be carved afresh issue Ajnamallyas to the Daitas while the Gajapati King endorses the mission by handing them the Sankalp Gua to perform the entrusted task.As per tradition, a team comprising of able bodied Daitas, Biswabasu, Bidyapati, Brahmins, Biswakarmas, Purohits, and Deula Karan visit goddess Mangala at Kakatpur to get instructions about the locations of four Neem trees to be transformed as Darus for four deities.After identifying the four Neem trees the cutting ceremony was to be performed and the trees would be cut to a definite size by the Biswakarmas.The Darus were to be consecrated by the Brahmins and then wrapped in silk and mounted on newly built wooden cart and pulled to Shri Jagannath temple.Under the instruction of the senior Daitapatis, the Biswakarmas carve out the shapes of four deities from the Neem tree trunk.Thereafter in a midnight secret ceremony the Brahmas from the old Bigrahas would be transferred to new their new bodies.The entire process takes 45 days.