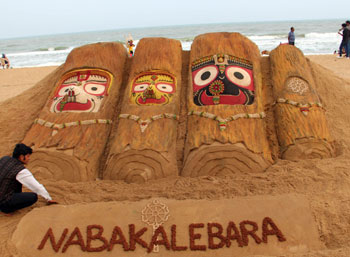 Odisha Channel Bureau Jagatsinghpur, April 24: The Neem tree (Daru) found suitable for the idol of Goddess Subhadra has been identified at Nilakantheswara temple in Adhanga village under Biridi block of this coastal Odisha district.The formal announcement about selection and identification of the Daru for the Nabakalebara of Goddess Subhadra was made by chief administrator of Shri Jagannath Temple Administration Suresh Mohapatra.The district administration has taken necessary measures to protect the Daru located in the premises of the Nilakantheswara temple.Meanwhile, the Yagna near the Daru of Lord Balabhadra, which began on Thursday near Sarala shrine at Jhankad, was scheduled to end today afternoon.The cutting of the Daru will begin at the end of the Yagna.On the other hand, the Daru of Lord Sudarshan, which was collected from Gadakantunia village near Bhubaneswar, has reached Puri.The Sudarshan Daru, which was kept near Alam Chandi shrine in the holy town on Thursday night, will be taken to Koili Baikuntha at Sri Jagannath Temple during the day today.The Daru for the Lord Jagannath idol has also been found in Jagatsinghpur district.The formal announcement will be made after seven days, according to sources.