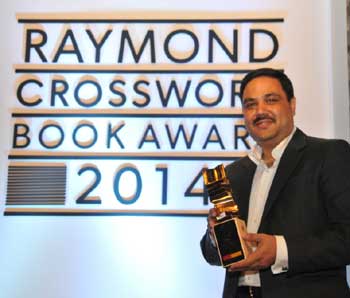 Odisha Channel Bureau Mumbai, April 29: The finest of Indian Literature took center stage at Raymond Crossword Book Award 2014 as the country’s finest writers and their books were honoured at a glittering award function at NCPA in Mumbai.The awards this year are in association with Principal Retirement Advisors, Club Mahindra, Kotak Mahindra Bank and Runwal Group.Eminent jurist and a former mayor and Sheriff of Mumbai Nana Chudasama and Indian fashion designer, politician, and a social worker Shaina NC were the Chief Guest for the evening, which also included a memorable performance by The Raghu Dixit Project.With over 50,000 voting entries for the popular award, it is the highest number of votes ever received in the history of the Book Award.The entire judging process has taken more than 3 rigorous months which includes short listing the books to announcing the final winner.Speaking on the occasion Kinjal Shah, CEO, Crossword Bookstores said, “This year we complete 13 years of the Book Award.These awards have always been an integral part of the brand & we are thrilled at the way it has grown over the years & supported Indian writing.We at crossword would like to thank the readers, authors, publishers, the jury, and all our sponsors for their support in the endeavour of rewarding the best of Indian Literature”Commenting on this occasion Madhu Dutta, Marketing Head – Lifestyle Business, Raymond Limited said, “An avid reader breathes life into a story; a story that springs to life and performs in front of you.It’s an intellectual mind that goes beyond the ordinary. One to have that finer taste in life, a well-read and travelled gentleman resonates with everything that makes the complete man.We at Raymond couldn’t be happier to associate with Crossword Book Award to celebrate the seamless synergy between a reader and the sartorialist.” The 13th edition saw an outstanding response, from the various distinguished writers, publishers, critics and book-lovers who enjoyed the biggest celebration of Indian literature.Shortlisted authors Ravinder Singh, Durjoy Dutta, Ashwin Sanghi, S Hussain Zaidi, Rashmi Bansal, Anand Neelkhantan, Ravi Subramanian, Jerry Pinto, and Amitabh Bagchi were present at event.Crossword Book Award is the only Indian award that recognizes and rewards good writing and also actively promotes Indian authors and their books.When the book awards were launched in 1998, there was one cash prize of Rs.2 lakhs for the best original work of fiction in English by an Indian author, and it was won by Allan Sealy for The Everest Hotel.In 1999, a new category was added Indian Language Fiction Translation into English and the cash prize was increased to 3 lakhs in each category.In 2005, two more award categories were added English Non-Fiction, as well as the Popular Award.In 2009 award for Indian Children’s writing was introduced thus making it the only Indian literary award that rewards authors across 5 different categories.Each award carries a cash prize of Rs 1 lakh, a trophy and a citation.