Owl chicks to be rescued from Jagannath Daru 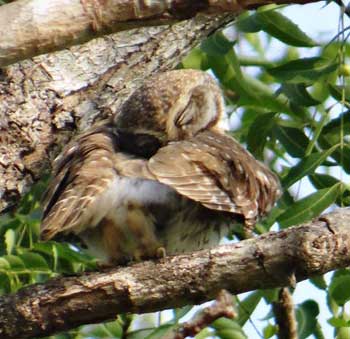 Odisha Channel Bureau Bhubaneswar, May 4: The Forest Department authorities today asked the District Collector of Jagatsinghpur to help them rescue the owl chicks from the holy tree that had been identified at Kharipadia village as Daru of Lord Jagannath.Principal Chief Conservation of Forests (Wildlife) wrote a letter to the District Collector asking him to inform them about a convenient date and time for a rescue team from the Department to be sent to Kharipadia to rescue the owlets from the holy tree.The PCCF (Wildlife) wrote the letter to the District Collector acting upon a representation from wildlife activist Biswajit Mohanty.“We have received reports that there is a nest of spotted owlet on the tree which has some fledging chicks that are unable to fly.Felling the tree without rescuing them would result in their sure deaths.As spotted owlets are a protected species under the Wildlife (Protection) Act, 1972, we strongly urge you to take necessary steps for their protection,” Mohanty wrote in his letter that was e-mailed to the office of the PCCF (Wildlife).The fate of the newly hatched owl chicks was uncertain till the matter was taken up by Mohanty, who is the secretary of Wildlife Society of Odisha.The holy Neem tree is likely to be cut within a few days to be taken to Puri for carving of the Nabakalebara of Lord Jagannath.