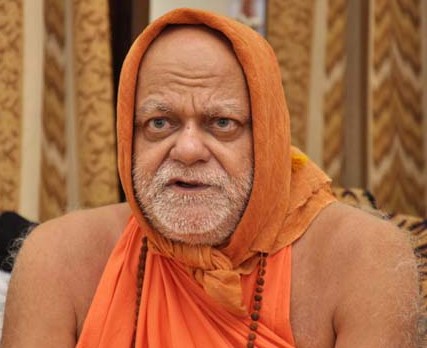 Odisha Channel Bureau Puri, May 26: Gajapati King Dibyasingha Deb along with four temple managing body members besides the administrator of rituals P.K.Dash met the Swami Neeschalananda Saraswati, the Shankaracharya at his Gobardhan Peeth here on Tuesday and persuaded the seer to participate in the rituals and Rath Yatra of the Lord Jagannath this year.With this the ongoing conflict between the temple administration and the Gobardhan Peeth came to an end.Gajapati Dibyasingha Deb, the chairperson of the temple managing body along with members met the seer and conveyed the decision of the temple managing body which resolved to resume the age old tradition of inviting the seer to participate in the fete.The resolution said that while the Acharya could touch the deities on Snan Mandap and on Rathas and perform his service the accompanying disciples should not touch the deities.Before the matter came to an end, the two religious heads had a closed door meeting for an hour.Shankaracharya told the media that the temple body delegation headed by the Gajapati described the last year letter of the temple administration as unfortunate and that the temple body had resolved to resume the age old practice of inviting the seer along with his six disciples to participate in the grand fete of the deities and ensured that such unfortunate things would never happen again.The seer accepted the invitation and advised the government officers in the temple body not to interfere in religious matters. Last year, the temple administration sent a letter to the Shankaracharya asking him to come alone to participate in the Rath Yatra.Sankaracharya took it seriously and he did not turn up and protested the raw deal to the seat of Sankaracharya considered as one of the top statutory institutions of the Hindu faith.This incident had evoked widespread reactions among the devotees and the administration came under fire by the devotees of Jagannath cult.