Odisha Channel Bureau July 14: With the allotment of homestead land and sanction of house-building-grants to the displaced people, the government agencies have initiated measures to expedite the relocation of 571 families from sea-erosion-hit Satabhaya village of Odisha’s Kendrapara district. 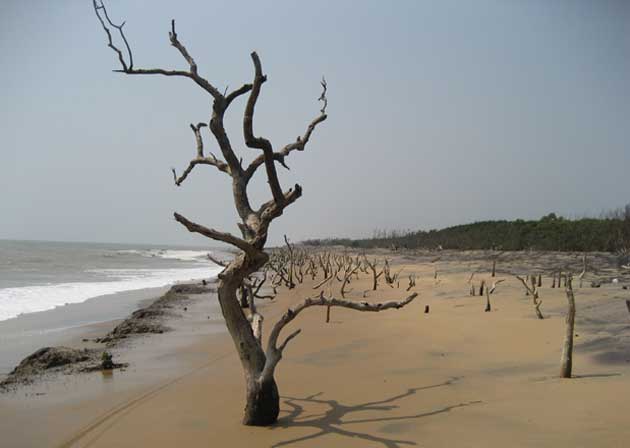 Once the relocation process is complete, it would be Odisha’s first ever rehabilitation and resettlement project for people displaced by sea erosion.While people are registering vociferous protest against acquisition of their land elsewhere, the things are on the contrary in Satabhaya.People here are intent on leaving their ancestral land for ever as sea is steadily eating up their settlements.Despite forest clearance hurdles, the government is intent of relocating the people before the onset of monsoon from their ancestral villages of Satabhaya and Kanhupur, already ravaged by advancing sea. A joint survey of Bagapatia village that on record is a ringed out village of Bhitarkanika wildlife sanctuary has already been undertaken by Department of Forest and Department of Revenue.At present Bagapatia, the site of the resettlement colony is bereft of forest cover.The state environment and forest department has given its consent for rehabilitation of people at the proposed site.However, the final clearance from the national wildlife board is awaited, said Kendrapara Additional District Magistrate Sashadhar Nayak.“I have submitted the project proposal for allotment of Rs 26.25 crore of which Rs.18.32 lakh is towards cost of acquisition of private land and payment of compensation to land-losers.The required grants for the project are being released in a phased manner.Funds are no constraints for the project,” Nayak said.The targeted beneficiaries who are losing out their ancestral place of inhabitation to sea in Satabhaya were allocated 10 decimal land each for the construction of their dwelling houses in the resettlement colony.People have to build their own houses with state funding from Biju Pucca Ghar scheme.However, the beneficiaries could not be provided with land records of rights or ‘patta’ as the administration is yet to receive forest clearance approval from competent authorities, said officials.House building grants worth Rs.70,000 to each of the plot owners have been sanctioned.Once they resume the construction work, fresh grants would be sanctioned to them.Of the 571 beneficiaries, around 30 families were left out from the housing grant benefits as they were economically well off and did not come under the eligibility criterion of Biju Pucca Ghar scheme. Ancillary work related to the rehabilitation project has already got underway. As the resettlement colony site was low-lying, people had objected to it.They had demanded the site development with heightening of the level of land.It is being done on a war-footing.The construction of community building, Anganwadi centre, primary school and high school buildings, digging up of deep tube wells, internal and external roads to the colony is going on at present.Besides, laying of 11 KV line for electrification of the site is in progress, and construction of Rs.3 crore worth coastal embankment to protect the area from ingress of tidal water has also begun, according to officials.