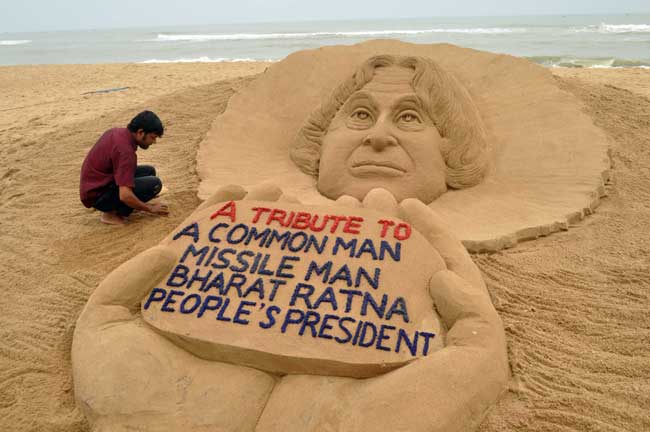 Odisha Channel Bureau Kendrapara, July 28: The death of ‘people’s president’ APJ Abdul Kalam has triggered a pall of gloom in seaside villages of Odisha’s Kendrapara district even as suspected Bangladeshis fondly recalled the ex-president’s prompt intervention that saved them from deportation.It was Kalam who had saved us when the government had asked us pack our bags.We were served Quit India notice on January 15, 2005.The notice had made it mandatory for us to leave the country with bag and baggage in a month’s time, they said.“His death has deeply upset us.It has elicited a feeling in us as if a near and dear one has passed away.It was because of the kind-hearted president’s gesture that we are still living in the country,” felt Rabi Mandal, a resident of Lunimathia village.It’s pertinent to note here that on January 15, 2005, as many as 1551 suspected Bangladeshis from 362 families in Mahakalpada tehsil of coastal Kendrapara district were served quit India notice under foreigners’ act provisions.A month later, the deportation move, however, was kept in abeyance by union home ministry.“We had everything with us to prove that we were Indians.We had voters’ identity cards, rations cards, names figuring in voters’ list.Many had PAN cards.Still we were branded as foreigners and were asked to leave the country.We had moved various quarters but to no avail.“Finally, we had launched a postcard campaign addressed to then president APJ Abdul Kalam.We were later told that the president’s office had made prompt inquiry and had sought a report from the state government.We are of the firm belief that deportation was halted only after presidential intervention,” recalled Prafulla Mistry, a resident of Ramnagar. “All of us are in deep mourning after we came to know of his death from TV news yesterday night.He was a kind-hearted man,” bemoaned Dipen Biadya.