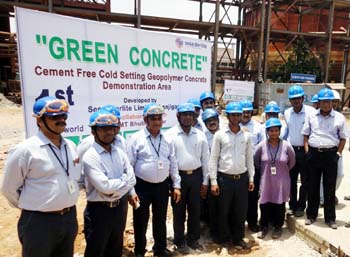 Odisha Channel Bureau Bhubaneswar, June 26: Vedanta Lanjigarh was in news few months ago when the first Red Mud Powder Plant in the world was commissioned with use of the same in Cement Industries and thus avoiding major environmental risks of Alumina refineries.Now Lanjigarh Alumina refinery of Vedanta has become the first company in the world to develop Cement Free Green Concrete by using fly ash only.The concrete is named as Cold Setting Geo-Polymer Concrete due to its properties of fast setting in ambient conditions.Speaking on the occasion Mukesh Kumar, president and COO of Lanjigarh Alumina Refinery informed that they have developed a Zero Waste Model around three years back and since then they are working on numbers of projects related with waste utilization to ensure Optimum Utilization of Natural resources.This new technology has been developed in association with CSIR laboratory IMMT, Bhubaneshwar and in-house research, according to a press release issued by the company on Wednesday. The Concrete is truly Green Concrete as water is required only at the time of preparing the mixture and thereafter no water curing is required; thus saving not only huge quantity of water but labour also as the concrete is stabilized in less than six hours only.Kumar further informed that most of the cement concrete structures start deteriorating after about 20 years but the geo polymer produced using fly ash can be more durable.Several attempts made world over to start using fly ash in concrete as well as in producing geo polymer but the main problem till date was that polymerization and curing was requiring temperature above 50 degree celcius and thus commercial use could not be started.Now in association with IMMT Bhubaneshwar, special activators have been developed which allows not only producing Cement Free Concrete for strength upto M50 but also having properties of acid resistance, alkaline resistance, less permeable and fast setting.Kumar informed that their next milestone is to prepare this material in ready to mix form so that it becomes user friendly.At Lanjigarh refinery, roads are already being made of cement free green concrete and now the planning is to stop use of cement in other constructionalso progressively.“The use of fly ash in cement free concrete will not only minimize green house gas emission, but will also solve the problem of fly ash disposal which all the power plants in the country are facing today,” the company said.