Odisha Channel Bureau Bhubaneswar: Odisha Rajya Bidyut Upabhokta Mahasangha has decided to intensify its protest against power cuts across the State.The decision to intensify the agitation against frequent power cuts was taken at a convention organised by the Mahasangha here today. 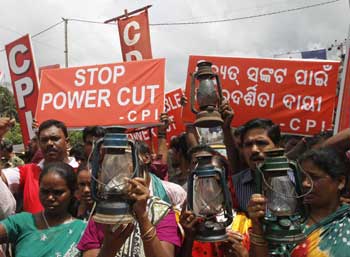 The speakers lamented that 20 years after power sector reforms in the State, the capital city Bhubaneswar has to face power cut for two hours and in rural areas from 4 hours to 6 hours a day.The Mahasangha meeting decided to organise demonstrations before the offices of Odisha Electricity Regulatory Commission (OERC), WESCO, NESCO, and SOUTHCO for not abiding by the conditions for providing quality service at cheaper rate and failing to comply with ATC loss of the national average of 17 per cent.The conference decried that the power utility companies had failed to invest a single paise for improving the infrastructure of and smooth management of power sector. The conference presided by Panchanan Kanungo, chairman of the Mahasangha.Rabi Behera, convenor of the Mahasangha, who presented a background paper for the people’s movement against power cuts, demanded CAG audit of the income and expenditures of power utility companies and controlling ATC loss.Leaders of several opposition parties such as Congress, CPI, CPI(M), Samajwadi Party, CPI(ML), Samata Kranti Dal, Odisha Janmorcha, RPI and several civil societies organisations and citizen forums also spoke in the meeting and extended their support for this movement.The conference resolved to take the movement to all the 30 districts to compel the State government to ensure uninterrupted power supply in the State.People from as many as 24 Districts participated in the meeting. The power consumers and those who addressed the convention said that protest demonstrations should be organsied at all district headquarters towns in the State during December and January.