Satkosia turns into a Maoist sanctuary

Odisha Channel Bureau Angul: Maoists have finally made Satkosia wild life sanctuary, located in the middle of the state, as one of their sanctuaries thanks to high density forest and complacency of Odisha police.Since September 31, more than 300 heavily armed cadres, consisting of some women fighters have been staying in the sanctuary and have been visiting village after village inside the sanctuary areas least caring police operations.However, police count the number of ultras within 50. 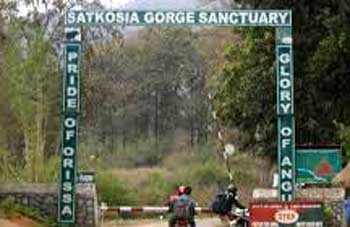 Informed sources say that it is not the fact that police is caught off guard.Police was well aware of earlier stray instruction of the armed cadres for last some years into Satkosia although they use the boarder of the sanctuary as their one of the corridors.But this time, Maoists believed to be of Chhattisgarh and Jharkhand origin have made up their mind to stay in Satkosia permanently. Their attack on some forest department staff and burning of forest beat houses in initial days has made the forest department activities in sanctuary totally paralyzed.Their patrolling whatsoever was is now limited to day time only.The tourists flow has drastically down from the beginning of this month after the news of Maoist movements in Chutkei, Krushnachakragarh, Chuanri, Tuluka, Pampasar, Kulsore, Pukhunda and Manikjodi and other areas.“It is wrong to say that the department is totally down in wake of the new development.We are patrolling the areas in daytime and most of the beat hoses apart from those affected areas are manned.Our senior officials visit to the sanctuary areas to boost the morale of our men.”said the Regional chief conservator of forest of Angul Circle Anup Kumar Nayak.Meanwhile, massive combing operations are on jointly by state and central forces in affected areas to flush out the ultras.But despite the operation the Maoists seems to be undaunted.They are still visible in some villages just 40 to 50 km away from Angul city.They are reported taking the help of local poachers who are well versed with the road communication.Police officials who are hopeful to flush out the Maoist like earlier are a bit worried this time.The deep resentment among the people of the sanctuary villages against the government for lack of developmental and welfare works as well as strict restriction on their livelihood by forest department may be cashed in by the ultras to win them over for their advantages.Now the people in entire Satkosia and adjoining Narasinghpur jungle are panicked.Senior police officials, meanwhile, are tightlipped about their course of plan and operations.“We are out best to deal with the menace and doing all possible to take on those Maoists.We are hopeful to make breakthrough though the deep forest and inhospitable terrain are problematic for us,” said Angul superintendent of police Rajesh Pandit Uttam Rao.Experts believe that base in Satkosia by Maoists is considered as a strategic gain by the ultras as the area provides access to Narasinghpur, Dhenkanal jungles and industrial belt of Angul district.