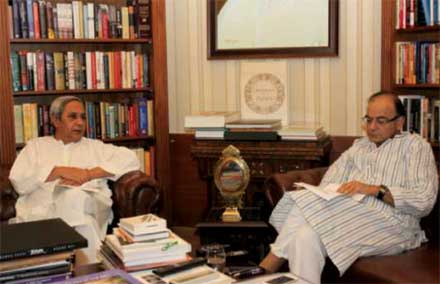 He stated that Odisha deserves a greater share in Central assistance as compared to other Eastern States in terms of its backwardness and low levels of almost all socio-economic indicators, Patnaik said.According to an official release, the Chief Minister added that Odisha has continuously suffered since independence on account of inadequate flow of central resources.The State’s problems are compounded by recurring floods/ cyclones/ drought which play havoc with the State’s economy, Patnaik added.He mentioned that during 2015, Kharif crops have been severely impacted in large parts of Odisha due to inadequate rainfall in July/ August, 2015 and about 5.32 lakh hectares of cropped area has suffered damage to the extent of 33% or more.He apprised the Union Finance Minister that the State has already announced a package of drought assistance for farmers estimated to cost over Rs.1000 crore, towards drought mitigation and protection of interest of farmers.Patnaik impressed upon the Union Finance Minister to recognize the severe challenges faced by the State and to provide Special Central Assistance of at least Rs.3500 crore to Odisha at the earliest.In addition, he requested to provide interest incentive @3% for converted medium term loans to enable the affected farmers to avail the prompt repayment incentive at par with short term crop loans.The Chief Minister expressed concern that even till date about 2/3rd of the State is not covered by any Bank branch.He asserted that for ensuring financial inclusion, it is necessary to have at least one Bank branch in every Gram Panchayat of the State.Patnaik requested Jaitley to issue directions to the Banks to provide required logistics and manpower support for opening Brick and Mortar Branches in all unbanked Gram Panchayats as per the schedule finalized by the State Level Bankers Committee.He brought to the attention of the Union Finance Minister that discontinuance of Central Assistance for Key Area Development Programmes including Special Plan for KBK, Backward Region Grant Fund and Integrated Action Plan for Left Wing Extremism affected Districts are severely impacting the most vulnerable groups of the backward regions of Odisha.He also urged the Union Finance Minister to either restore the provisions for these critical schemes or provide a special package to the State for continuance of these vital programmes.Patnaik informed that the ongoing major and medium irrigation projects sanctioned in the State are suffering on account of inadequate release of funds in the past and inadequate provision made for 2015-16.He stated that the requirement of the State to meet the balance cost of ongoing irrigation projects works out to about Rs.5200 crore.And in addition, there is a huge backlog of previous years.He impressed upon the Union Finance Minister to review the prevailing situation and enhance the outlay under Accelerated Irrigation Benefit Programme (AIBP) for Odisha for ensuring that the ongoing major and medium irrigation and flood control projects are completed without further delay.The Chief Minister also asked for enhanced allocation under Pradhan Mantri Gram Sadak Yojana (PMGSY).He mentioned that the State has been allocated merely Rs.912 crore in 2015-16 under PMGSY against the requirement of Rs.5000 crore for the balance projects already sanctioned in Odisha.The State has already made a provision in the Budget Estimates for 2015-16 anticipating at least Rs.1800 crore under the scheme, he stated.Patnaik urged Jaitley to enhance allocation under PMGSY for Odisha to at least Rs.1800 crore during the current year.The Union Finance Minister assured that the demands of the State would be considered favourably and the interest of the State shall be protected while finalizing the devolution of Special Central Assistance of Rs.20,000 crore provisioned in the current budget, according to the press release issue by Patnaik’s office.Jaitley also assured to look into the issues of restoring Central Assistance for Key Development Programmes and providing additional funds under the Accelerated Irrigation Benefit Programme.