Odisha Channel Bureau Bhubaneswar: A large number of people who gathered at a State level function here today to remember the men, women and children who lost their lives in the super cyclone on this date in 1999.The function was organised by the Odisha Government and other agencies to observe the Disaster Preparedness Day and National day for Disaster Reduction.Speak on the occasion, Chief Minister Naveen Patnaik appealed to the citizens to come forward and join hands to work towards a disaster resilient Odisha. 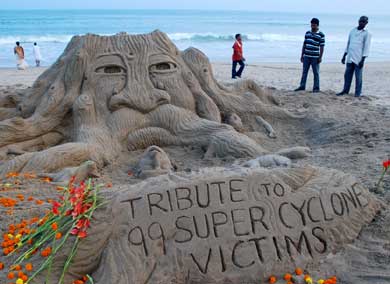 Patnaik thanked the volunteers, ODRAF, NDRF, Fire Service, the Department of Space and all officials including the Armed Forces, engaged in relief and rescue operations.He also thanked the Cyclone Shelter Management and Maintenance Committees, PRJ & Community members, NGOs, Indian Red Cross Society’ and UN Agencies for their cooperation and service in managing disasters in the State.The Chief Minister said that the State Government has been pursuing a pro-active, community based and technology driven disaster management strategy to protect lives, livelihoods and assets of the people.“With the creation of Odisha Disaster Management Authority, we have concentrated in improving our disaster preparedness and response standards through construction of disaster resistant infrastructure, trained community based organizations, and strengthened state and district emergency operation centers.” In the aftermath of the cyclone Phailin in 2013, the government has taken up construction of over sixteen thousand disasters resilient houses for the affected people in the districts of Ganjam and Khorda under Odisha Disaster Recovery Project, Patnaik added.He expressed satisfaction that “Use of Space Technology in Disaster Management” has been chosen, as this year’s theme.Patnaik further expressed hope that Odisha’s disaster preparedness will be enhanced with the use of proven space technology.Space technology should help in giving more timely information in dissemination of data through GIS based platform, he said.