Odisha Channel Bureau Bhubaneswar: Expressing concern over detection of a huge quantity of iron ore worth crores of rupees buried in the Renjda Railway Siding in Odisha’s Sundargarh district, activists today demanded that the entire Renjda Siding should be sealed by the District Collector and police be posted to ensure that nobody removes any stolen ore pending the IBM enquiry. 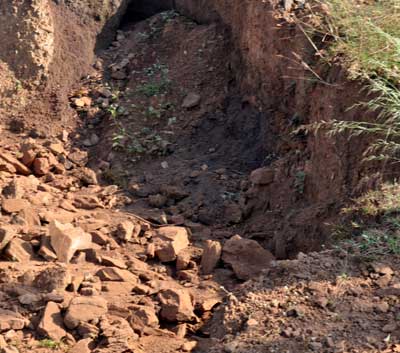 The entire Railway staff of the Siding station should be moved out, as all this had happened with their connivance, they alleged while participating in a conference organised by the Wildlife Society of Orissa (WSO).A proper investigation should be made into the stock of iron ore in the adjoining sidings at Roxy, Bimalagarh and Chandiposi as there is possibility of buried iron ore in these places too.There was a massive cover up in the region prior to the visit of M.B.Shah Commission and Central Empowered Committee of Supreme Court last year.Biswajit Mohanty and Anil Dhir who raised the matter said it is clear that the ore was stolen and unaccounted for as there is no claimant for the stock.The initial knee jerk denial of Mines Minister Prafulla Kumar Mallick was later repudiated by the subsequent visits of the team sent by the collector Sundargarh.The high level team of members of the Bharatiya Janata Party which carried out a spot verification on 13th October, 2015 confirmed the fact.The Sundargarh Collector had ordered an inquiry by the Bonai Sub Collector and the Deputy Director of Mines, Koira and the Additional Superintendent of Police, Bonai, who went to the spot and collected samples.The government continues to insist that a small amount of iron ore seems to have been mixed with soil and the allegations are exaggerated, they said. Union Minister of Tribal Affairs Jual Oram had countered the denials by Mines department of the State government and Mines Minister Mallick.On his demand, an enquiry by the Indian Bureau of Mines or IBM is underway. Mohanty and Dhir alleged that the siding owner, the district administration and the government are on a massive cover up operation.If the contention that the ore is just residual waste of earlier period, than why are people being stopped from visiting the area, they asked.The exposure of this buried ore reveals the fact that the mining scam is still going on in Odisha due to the active connivance of the local officials and higher ups in the Steel and Mines department.The state government has not acted on its promise made in the ATR to the Shah Commission Enquiry report that no illegal raising or transportation of minerals will be allowed in Odisha.No prompt action has been taken so far to seal the siding which reveals the nefarious motives of the State government, they alleged.