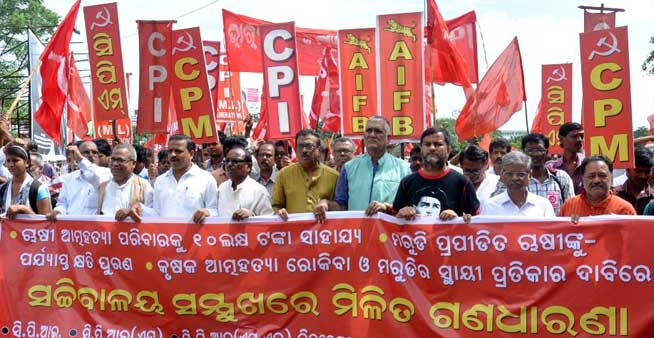 “Inquiry is going on to ascertain the actual cause of deaths,” said BJD spokesperson Pratap Keshari Deb.The State government would issue a white paper on farmers’ suicides, he added.The officials, who are visiting the families of the deceased farmers, have also been saying that inquiry is being conducted to know the exact reason for the farmer suicides.Though the distressed farmers have been committing suicides since first week of September, the State government has not been able to make public the inquiry report even a single suicide till date.Chief Minister Naveen Patnaik has not visited a single drought-hit region or family of any of the deceased farmers though his government has admitted that a total of 139 blocks spread over 21 districts have been affected by drought.The benefits of the package announced by the government for the distressed farmers have not reached a single farmer so far.Meanwhile, Agriculture Minister Pradeep Maharathy faced the people’s ire during his to the drought-hit Balangir district during the day.Some BJP workers who showed black flags to Maharathy were taken into custody by the police.Opposition Congress, which has been organising Jagaran Yatra to highlight the farmer suicides, has announced to stage dharna at all block headquarters towns across the State on November 6.The Left parties had jointly organised a demonstration in Bhubaneswar on Monday demanding adequate compensation for the debt-burdened farmers who had committed in the last few weeks.The farmers affected by drought have been staging demonstrations in different districts demanding that their areas be declared drought-hit and they be provided compensation for the crop loss they have suffered due to scanty rainfall.