Odisha Channel Bureau KENDRAPARA: Seawater off Bay of Bengal coast is abuzz with activity of a different kind.Much to the delight of wildlife lovers, the endangered Olive Ridley sea turtles have begun their annual rendezvous for mating in sea waters in Gahirmatha marine sanctuary.Forest personnel on patrolling drives have sighted pairs of mating turtles.The sighting of breeding turtles marks the commencement of mass nesting season of these delicate marine species.Gahirmatha beach off Bay of Bengal coast is incidentally acclaimed as world’s largest-known nesting ground of these animals. 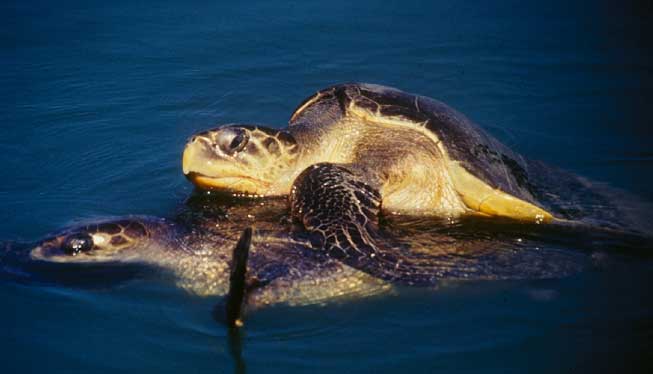 “On serene surface of sea waters, we have spotted hundreds of mating pairs along the Gahirmatha coast.Fishing prohibition is presently clamped in Gahirmatha zone to ensure disturbance-free mating of the marine animals.After the end of the mating season, most of the male turtles usually return leaving behind the female turtles to lay their eggs,” said Bimal Prasanna Acharya, Divisional Forest Officer, Rajnagar Mangrove (Wildlife) Division.The female turtles virtually invade the nesting beaches usually at the dead of the night for laying eggs, the phenomenon otherwise described as ‘arribada’.After indulgence in instinctive egg-laying, the turtles leave the nesting ground to stride into the deep sea water.Hatchlings emerge from these eggs after 45-60 days.It is a rare natural phenomenon where the babies grow without their mother, added the forest officer.The ban on sea fishing has been clamped in accordance with Sections 2, 7 and 4 of Orissa Marine Fishing Regulation Act (OMFRA), 1982 and provisions of Wildlife Protection Act, 1972.“To ensure the safety of turtles, the prohibitory orders are being strictly enforced.The trawl operators have been cautioned not to venture into prohibited water zone.Any act of trespass would invite punitive measures”, said Divisional Forest Officer, Acharya.Rise in mortality rate of mating turtles along the coastal water surface led to the clamping of prohibition as the gill nets used by the trawls prove to be messenger of death for breeding turtles.The mute species, accorded as Schedule-1 animal under the Wildlife Protection Act for its highly threatened status, get entangled in the nets for prolonged period and die of asphyxiation.The turtles also perish in large number after getting hit by the fast moving propeller of the fishing trawlers, forest personnel said.The rate of mortality of these endangered species is quite high.An Olive Ridley usually lays about 120 to 150 eggs from which hatchlings emerge after about 45 to 60 days.But not all eggs remain intact as predators devour it.Besides, eggs are also washed away by sea waves during high tide.The eggs are incubated in the nest and grow, sans mother, to emerge as hatchlings.