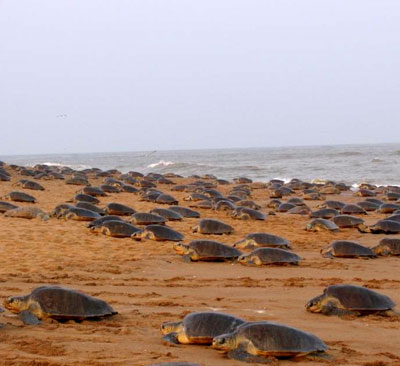 Odisha Channel Bureau Kendrapara, Mar 30: The mass nesting phenomenon of Olive Ridley sea turtles has brought to the fore the disturbing trend of erosion of nesting beaches in Gahirmatha.The emergence of nesting turtles on the Nasi-1 nesting ground was negligible while the nesting ground at the Nasi-2 Island was conducive and congenial.The Gahirmatha marine sanctuary missed the spectacular natural heritage of millions of turtles laying siege of the tranquil beach for mass nesting last year.Of the 4,13,334 turtles who turned up this year at Gahirmatha to lay eggs, Nasi-2 beach accounted for 3,91,446 nesting turtles’ visit.A meager 21,888 turtles had appeared at Nasi-2 beach for the mass nesting which had lasted for eight days.Low intensity nesting in Nasi-1 Island was mainly due to unsuitable angle of repose to crawl and climb up of the beach.The Nasi-1 nesting beach has been reduced to 1.6 KM while the beach at Nasi-2 is of 1.4 Km stretch.The nesting grounds would have hosted more turtles for arribada had its shape not been battered by sea waves, said officials.The beach at Nasi-2 has become stiff which has made the turtles to skip visit the spot.The angle of repose is almost 90 degree, which made it practically impossible for the turtles to climb up and crawl towards the beach to lay eggs.A 600 metre stretch of the beach was, however, free from erosion and fragmentation.As a result nearly 22,000 turtles had turned up for mass nesting at the unmanned Island, Divisional Forest Officer, Rajnagar Mangrove (Wildlife) Forest Division Bimal Prasana Acharya.However, the nesting ground at Nasi-2 was better suited for the animals mass nesting.A kilo metre stretch of the beach had the perfect ambience for mass nesting for which nearly 4 lakh turtles turned up for mass nesting.The beach has, however, been fragmented in patches.Though truncated in mid portion, the beach had attracted millions of turtles for laying eggs otherwise called ‘arribada’.The formation of sand bar in the sea close to the Nasi-2 nesting ground might also be acting as a deterrent for the delicate marine animals.It was posing stumbling block to the itinerant turtles to march towards the nesting beach.The area profile of the beach has also got decimated.This apart, the face of the nesting ground has turned steep and sharp inconveniencing the turtles in the act of climbing up to the nesting ground, felt DFO Acharya. The Defence Research and Development Organization (DRDO) and the Intermediary Test Range centre authorities in Wheeler Island had switched off the light on sea front to avoid distraction and disorientation of the turtles.The 1.5 km long nesting ground at Nasi-2 had been segregated into ten segments for meticulous enumeration of visiting marine animals.Nesting was intense in six of the segments while it low in rest of the segments.Average clutch size of the nests dug out by the turtles had the capacity to carry 60 to 80 eggs.However it has been found that multi layer nesting may have damaged eggs laid on initial days of mass nesting.As the turtles were seemingly in a hurry to lay eggs as per their natural instinctive urge, one nest spilled over to the other thereby causing damage to the laid eggs, DFO Acharya concluded.