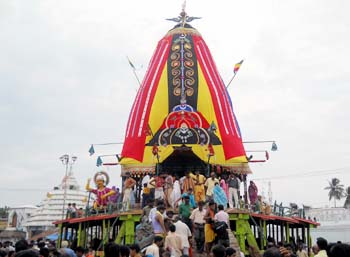 Odisha Channel Bureau Kendrapara, June 29: Rath Yatra was observed at Tulashi Kshetra, the abode of Lord Baladevjew here on Sunday with divine triad brought atop the 72 foot long chariot.As per tradition, rituals of the Lord were observed while the chariot would be pulled on Monday.In neighbouring Paradip Port Township, non-Hindus joined hands with Hindu devotees to observe the annual Rath Yatra of Lord Jagannath.The major highlight of the annual festival is that Muslims and Christians rubbed shoulders with Hindus to pull the strings of the chariot.The 60-foot tall ‘Aruna Stambha’ (the holy pillar erected near the temple entry gate for distant view of God) speaks the story itself.A concrete arch adorns the top of the pious pillar with the engraving of holy symbols of major religions like Hinduism, Islam, Christianity and Sikhism.The bustling port town lays claim to fame for tolerant religious practices among adherents of divergent religions.The Rath Yatra bears testimony to the communal amity prevailing in this region, quipped Sarat Rout, a trustee member of local Jagannath temple at Madhuban locality of the port town.Devotees who pulled the rope of chariot carrying Lord Jagannath, brother Balabhadra and sister Subhadra included some of the Muslim and Christian natives of the civil township.Numerically, a small number of minority community members might have taken part in the car festival, but it was a gesture of goodwill and amity.The non-Hindu devotees who took part in the festival were mostly the employees of Paradip port trust and industrial workers on the close periphery of the port town.Many of them have converged at the temple and offered prasad to the deity.Unlike elsewhere, the non-Hindus are conferred the rights to offer puja at the Lord and pull the chariot here, Rout said.In fact, the gates of the Jagannath temple have been thrown open to Muslims and followers of other religions since temple came up here in early Seventies.