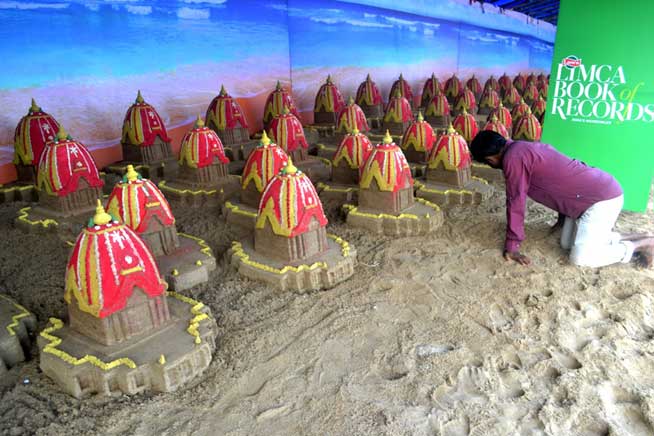 Senior editor of Limca book of records Arthy Muthanna Singh confirmed on Wednesday that Sudarsan’s 100 sand chariots will be placed in the Limca Book as a world record.Sudarsan has already 20 records in Limca Book of Records.He has been making sand art related to Rath Yatra every year.This year, the sand sculptures have been a big draw for tourists.Pattnaik used about 800 bags of sand within 2500 sqft area to create 100 chariots in sand.He took about 20 hours in three days to complete this.Twenty-five students from his sand art institute assisted him in this work. After getting an official permission and instructions from the editor of Limca book of records, they had started carving the chariots on sand on July 2 and completed it on July 4.Sand sculpture is believed to have originated during the Rath Yatra in the 16th Century by Balaram Das, a staunch devotee of Jagannath and poet.Das was once humiliated by the servitors and not allowed to pull the chariots during Rath Yatra.He then went to the beach and sculpted chariots on the sand.It is said that his chariots moved on sands whereas the real ones on the Grand Road in Puri got stalled.The King, Prataprudra, came down to Das to apologise to him and pull the chariots.Thousands of devotees of Lord Jagannath who have arrived in Puri to witness the Rath Yatra are thronging the beach to have glimpses of the 100 sand chariots.