Odisha Channel Bureau
Bhubaneswar: As part of a demonstration project, Odisha Power Generation Corporation Ltd has installed a roof top solar project (Photovoltaic) on the top of the existing plant switchyard building at its Banharpali-based Ib Thermal Power Station (ITPS) in Jharsuguda district of Odisha.The capacity of this solar project is 3kW and it will supply power to the switchyard building internal lighting system. 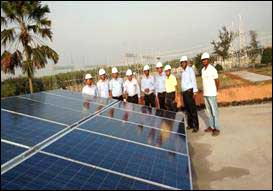 The Solar project was inaugurated on March 21 by OPGC Director (Operations) Alok Mukherjee in the presence of other senior officials of ITPS. Another solar project i.e.solar water heater project is under execution at the roof top of ITPS township guesthouse.The company is exploring the options of installing additional solar equipment in coming months, according to an official release. It may be noted here that, OPGC is currently operating a coal power plant of capacity 2X210MW (Unit 1 & 2).

As part of its capacity addition program, OPGC is expanding its power project of 2×660 MW (Unit 3 & 4) with a capital outlay of Rs.11,547 crore, based on supercritical technology, adjacent to the existing power station at the same location.The project is under advance stage of construction with Bharat Heavy Electricals Limited (BHEL) as main plant contractor and BGR Energy Systems Limited (BGRE) as balance of plant contractor.The said units are scheduled to be commissioned towards end of the financial year 2017-18.