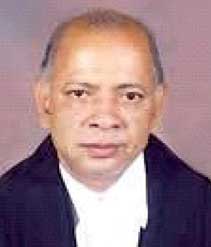 Odisha Channel Bureau CUTTACK: Justice Bhabani Prasad Ray, a sitting Judge of Orissa High Court, passed away here on Thursday.He was ailing for a few weeks and passed away in a private hospital in the city.Justice Ray is survived by his wife and two daughters.Popularly known as ‘Felu Bhai’, Justice Ray had taken oath as an Additional Justice of the Orissa High Court on November 7, 2007.Ray, who was born in Shibapur village of Biridi Block of Jagatsinghpur district on March 2, 1955, obtained LL.B.Degree from the Utkal University Law College, Bhubaneswar.He started practicing law from January, 1979 and proved himself as an eminent Lawyer in the fields of Constitutional Law, Criminal Law, Civil Law and Taxation Law.He was elevated to the post of Additional Standing Counsel of Commercial Taxes for his outstanding performances during Nineties and continued as such for a period of three years.After working in Orissa High Court for three years as a Judge, Justice Ray was transferred to Kerala High Court in October, 2010.He was transferred to Orissa High Court in March 2014.