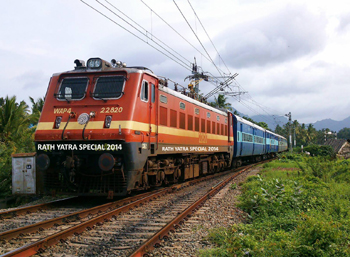 Odisha Channel Bureau Bhubaneswar, July 3: With an aim to provide comfortable journey to the commuters and avoid rush in regular trains to and from Puri during the world famous car festival of Lord Jagannath, East Coast Railway has provided special trains from different parts of Odisha along with special trains to and from neighboring states.In view of rush, ECoR has lined up special trains to and from Puri on the occasion of Sandhya Darshan, Bahuda and Suna Besha of Lord Jagannath.All the special trains will run as passenger trains and will stop at each and every station from originating to destination and back.Besides the special trains announced for Gundicha Rath Yatra festival earlier, 49 special trains will now run for Sandhya Darshan, Bahuda and Suna Besha festivals, according to an official release issued on Thursday.12891/12892 Bhubaneswar-Bangiriposi-Bhubaneswar Express has been extended up to Puri till July 9.Apart from this, a large number of extra coaches have been kept to provide service as per requirement.Elaborate arrangements have been made for cleaning and watering of trains for ensuring pleasant and comfortable journey.SANDHYA DARSHANA special train has been arranged between Cuttack and Puri which will leave Cuttack at 0730hrs towards Puri and will return to Cuttack at 1900hrs from Puri.BAHUDA YATRASpecial trains from Visakhapatnam, Kharagpur, Balangir, Kendujhargarh and Bhadrak will leave on July 6 and from Paradeep, Cuttack and Brahmapur on July 7 towards Puri at various timings and will also return from Puri on July 7 evening towards these destinations.SUNA BESHASpecial trains from Cuttack, Bhadrak, Angul, Brahmapur, Kendujhargarh, Balangir, Palasa, Paradeep and Visakhapatnam will leave on July 8 towards Puri and will also return back from Puri on the same day night towards different destinations.