Odisha Channel Bureau
Bhubaneswar: A joint fact finding team of Coordination of Democratic Rights Organisations (CDRO) comprising seven members, two members of Ganatantrik Adhikar Shurakya Sangathan (GASS) and eight members of organisation for protection of democratic rights (OPDR) that visited the villages of Dhinkia, Gobindpur, Patana and Mahala has demanded immediate withdraw of police force from the villages and lift all the cases against the villagers. 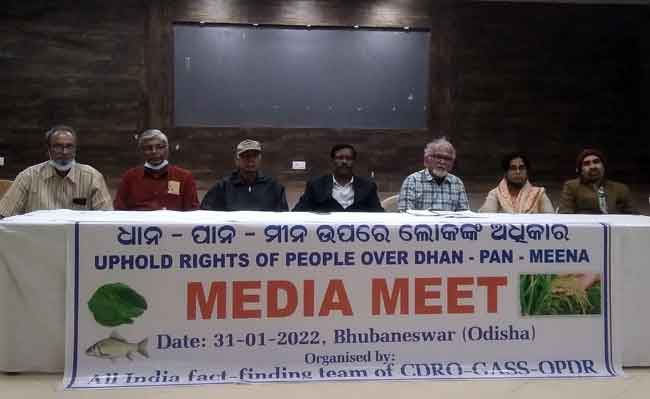 The team members have further demanded that the JSW project immediately be stopped and a judicial committee headed by a sitting Supreme Court Judge be constituted to examine all aspects including the forceful eviction of the farmers from their land.

The farmers and the labourers affected by the loss of the betel vines should be compensated by the administration, the team demanded on January 31.

The joint fact finding team also met Narendra Mohanty and Debendra Swain lodged at sub-divisional jail in Kujanga as well as the SHO of Abhaychandpur police station. The team also met the concerned lawyer handling the cases against the villagers.

“A total of 1193.974 hectares of land has been allotted to the JSW Utkal Steel Ltd. by the Odisha Industrial and Infrastructure Development Corporation (IDCO) for the development of a steel plant of 13.2 MTPA, 900 MW captive electricity plant, 10 MTPA cement plant and a captive port of 52 million tons transport capacity. Out of which non-forest land is 137.64 hectares. The bone of contention is this non-forest land and a large part of the forest land where the villagers have been cultivating betel, other fruits and paddy for generations.

In their statement released to the media, the team said that they have seen some papers issued by the forest department of Odisha giving rights to the farmers way back in 1982. “So the claim by the government and JSW that the villagers have no rights on the land that they tilled from long back is wrong,” they said.

“In 2009 Odisha government tried to evict forcefully a large number of farmers from their rightful possession for the proposed steel plant and captive port by POSCO. At this time the Odisha government illegally took possession of 2700 acres of land. Since POSCO left in 2017 the land is with the government, barring the farmers from entering the land. Now JSW came into the picture. They have asked for 1193.97 hectares of land, the government is now trying to evict more people from their possession to meet the shortfall of the demand of JSW.

“The land acquired during 2009 was not used for the purpose it was taken. So in our opinion according to the then law keeping this land in a land bank is illegal and this is nothing but a table transaction. Even the committees constituted by the central government including Meena Gupta Committee, Saxena Committee and POSCO enquiry committee made some observation in favour of the farmers and the possession of the land also belonged to the farmers, the government chose to change the character of land illegally”.

“From 2005 people of the area have been continuously agitating against the loss of their livelihood and in recent times when they learnt that the government is going to dispossess them from more land for JSW the protests reached a new peak.”

On June 2021 notification was issued and the villagers of Mahala started demonstrating from July in a democratic way and in August 2021 the village of Dhinkia held a peaceful demonstration before the revenue department demanding to stop the proposed project of JSW. On November 2021, a notice was posted in Patana village stating demarcation work will be conducted on 30th November, 2021.

“A similar notice was passed in Mahala on 1st December, 2021. All these activities of the government in the matter of so-called demarcation is against the spirit of the constitution and against the laws of the land.Because of the impact on their livelihood the people resisted these activities and the demarcation work could not be done. The police were filing fabricated cases against the villagers as well as the leaders of Jindal Pratirodh Sangram Samiti (JPSS) without their knowledge. During the course of the last two months police have setup at least three camps in the region with an intent to suppress the movement.”

On 14th January, 2022 when the people of Dhinkia village were going to their betel vines, a large contingent of police blocked their path and desisted them from going to their work. A commotion ensured and police resorted to a brutal lathi-charge on the people assembled including women and children. We learnt that more than 200 children and women were injured. Since then a reign of terror has been unleashed on the villages mentioned earlier. The grownups have not been staying in the villages during night time and according to the villagers police make frequent night raids without being accompanied by women constables and officers. They also told the team that people entering or going out of the village are being asked to produce their id cards.”

“According to the SHO of Abhaychandpur 18 cases were started since 14th January 2022 against some named people and 500 “others”. As human rights activists we know it very well police can and does implicate any person as one of those “others”. Out of the eighteen cases, 12 FIRs were filed suo motu by the police. Since independence not a single case has been registered in any police station of India against those erring officials of the government. According to police so far six people were arrested including Narendra Mohanty and Debendra Swain. It is also learnt that Debendra Swain was manhandled and insulted with filthy language while in police custody before his production in the court.”

Observations of the team:

“The whole project of JSW if implemented will rob people of their right to life and livelihood as enshrined in article 21 of our constitution and the Jindals will become richer at their expense.

“The way in which the environment impact assessment (EIA) was done is being questioned by the experts. As an example of destruction of the environment we cite that according to the proposal of JSW iron ore mixed with water will be transported in 330 km pipes from the mining blocks at Keonjarh and Sundergarh to the plant site at Dhinkia. For meeting the water requirement it is estimated that 48.5 million gallons of water will be fetched from the Mahanadi river at Jagatpur.”