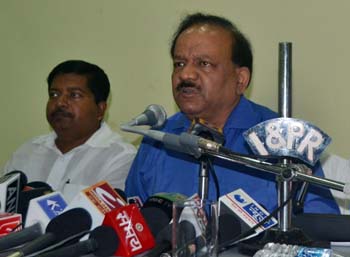 Odisha Channel Bureau Puri, July 20: The district headquarters hospital in Odisha’s holy town Puri will be upgraded and converted into a super specialty hospital before the Nabakalebar of the Lord Jagannath in 2015, said Union Health Minister Harsh Vardhan while talking to media persons here on Sunday.The Minister said that the hospital will have a medical college for which the Centre would provide necessary assistance to the Odisha Government.The hospital will also have a special trauma care department, Vardhan said.The six community health centres located alongside the Puri-Bhubaneswar national highway would be upgraded under the National Rural Health Mission projects, he added.The existing hospital was established in 1840 and at present it had 34 doctors, 36 nurses and 52 attendants.The Union Minister advised the State Government to deploy more doctors and paramedical staff in view of the Nabakalebar of Jagannath which was likely to attract over 50 lakh pilgrims from different parts of the country and outside.Earlier in the day, Vardhan along with his wife went to the Sri Jagannath temple and offered prayers to the holy triads in the sanctum sanctorum.They had meet Swami Nischalananda Saraswati, the Shankaracharya of Puri on Saturday late night.The Minister, who addressed a press conference in Bhubaneswar before leaving for New Delhi, said that the Centre will provide the required assistance to the State Government to make Odisha emerge as a major destination for medical treatment in the Eastern region.