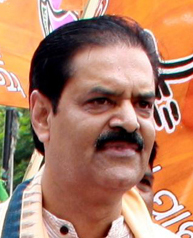 Odisha Channel Bureau Bhubaneswar, July 24: President of Bharatiya Janata Party’s Odisha unit K.V.Singh Deo on Thursday claimed that the arrest of top Maoist leader Sabyasachi Panda was stage managed.The Maoist leader was already with the police before the date on which the arrest was claimed to have been made, Singh Deo said at a press conference here.The BJP leader further alleged that whenever the Assembly was in session, Chief Minister Naveen Patnaik organised such drama with the sole motive to divert people’s attention from burning issues.“Such stage-managed incidents include surfacing of a snake in the Assembly; abduction of District Collector Vineel Krishna by Maoists; abduction of foreign nationals by Maoists; and now arrest of Sabyasachi Panda.” Singh Deo told journalists at the BJP State headquarters here, The BJP leader also demanded probe by any agency other than the Odisha Police to probe into the alleged nexus between the Maoists and some politicians.The National Investigating Agency may be entrusted with the probe, he added.Singh Deo further said that the State unit of the party will soon write to Union Home Minister Rajnath Singh urging him to consider getting the matter inquired by a central agency.He questioned the State police prayer before a Berhampur court seeking revision of its earlier order.The police was not in favour of the Maoist leader’s interrogation in the presence of his lawyer or family members and as it is feared that they might spill the beans about nexus between Maoists and political leaders, Singh deo observed.