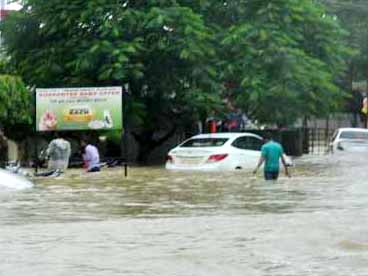 Odisha Channel Bureau Bhubaneswar, Aug 4: Torrential rain in many regions of Odisha, particularly in Sambalpur town in western part of the State since Saturday, has posed flood threat in many districts of the State.As heavy rains continued to last the State, water level in Mahanadi was rising at Khairmal, Tikarpada and Naraj creating fear of floods in the minds of the people in the districts of Cuttack, Khurda, Puri, Jagatsinghpur, and Kendrapara.Sambalpur had recorded over 500 mm of rainfall since Saturday, official sources said on Monday.According to reports, Sambalpur received 200 mm rainfall in the past 24 hours ending at till 8.30 am on Saturday, and 289 mm rainfall between 8.30 am and 5.30 pm on Sunday, as against the monthly average of 442.4 mm in the month of August.As a result, life had been thrown out of gear in all the low lying localities of the western Odisha town with people finding it difficult to move out of their home.The families living in the slums had been rendered homeless.The heavy rain in most parts of western Odisha was likely to create flood in Mahanadi system as water level in its distributaries downstream was swelling on Monday.On the other hand, water level was also on the rise in Brahmani river at Talcher and Jenapur, in Baitarani river at Akhuapada, and in Vansadhara river at Gunupur.Meteorological Centre at Bhubaneswar has predicted heavy to very heavy rainfall at many places in different regions of the State due to a low pressure area formed over North Bay of Bengal and neighbourhood.Meanwhile, heavy rainfall continued in Bhubaneswar and Cuttack since Sunday night badly affecting normal life.Many roads were flooded in Cuttack and similar was the situation in colonies in the periphery of the Capital city.