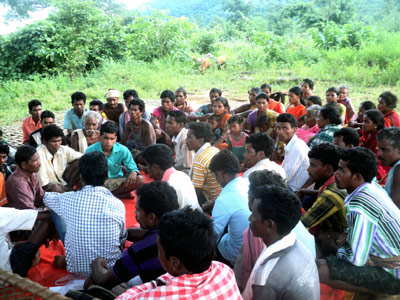 Odisha Channel Bureau Bhubaneswar, Aug 11: Campaign for Survival and Dignity (CSD), Odisha, the outfit which struggled for the enactment of historic Forest Rights Act, 2006 and presently monitoring its proper implementation in the State has urged Government of Odisha to review the ongoing three tier Panchayati Raj system in rural Odisha and to adopt FRA-Gram Sabha establishing direct democracy in the villages.Acknowledging the commitment shown by Biju Janata Dal and Congress in their election manifestos in the last general elections to reorganise the PRI system in Odisha and strengthen grassroots democracy, CSD has urged all the political parties in general and the ruling BJD in particular to declare one village as one panchayat irrespective of revenue and forest/un-surveyed village in the line of FRA, 2006 and PESA, 1996.“Now under FRA, 2006 all these forest and un-surveyed villages are to be converted into revenue villages soon,” CSD said.While BJD had committed to establish panchayat in every village having 1000 population and to extend financial autonomy, Congress had gone one step ahead and has committed that each revenue village would be converted into a panchayat extending power over 29 subjects, the organisation said in a statement on Monday.CSD has condemned the Government of Odisha for diluting the empowered Gram Sabha under FRA and PESA while implementing these Acts in the State.It has held the ongoing Panchayati Raj System of the State responsible for the dilution of FRA-Gram Sabha.It asserted that despite the progressive and empowered Gram Sabha provisions under FRA and PESA, the FRA Gram Sabha could not evolve because of the PR system.Citing an example, CSD ascertained that Government of Odisha openly violated the provisions of “2/3 Quorum” of the FRA Gram Sabha under Section 4(2) of Forest Rights Rules in the Circular vide letter No.40373/SSD dated, on 21.11.08 which emphasised on the one/tenth quorum of the Palli Sabha which is even not required once the Secretary of Panchayat certify it.Accordingly, the “2/3 quorum” of the FRA Gram Sabha has been consciously bypassed by Government of Odisha.Even the civil society organizations that should have worked to ensure FRA Gram Sabha in the State have failed to ensure it while facilitating FRA implementation in the State, said CSD.Reacting over the recent decision of the State Government on the presence of MLA in the Palli Sabha and Gram Sabha for selection of beneficiaries under Indira Awas Yojana and Mo Kudia schemes, CSD, Odisha condemned the government for disrespecting the grassroots democracy and politicisation of the Gram Sabha.“It is unfortunate that like Bureau crats, even the politicians irrespective of any political party (BJD, Congress and BJP) now do not have even faith over the capacity and competency of the Gram Sabha – the grassroots democracy,” said CSD.Pointing out loopholes in the existing PR system, CSD contended that the PR system is the ever biggest joke and farce in the name of decentralisation of democracy.“In this system neither the village is recognised as ‘self governing body’ nor there is any importance of the community which is clearly evident from the one/tenth quorum (provided no quorum is required when it is adjourned due to required of quorum).Neither the community people nor the people’s representatives are empowered while Bureau cracy are over empowered under this Act.” CSD has also called upon the community people across the State to over throw the current three-tier Panchayati Raj system and to establish the FRA-Gram Sabha for all purposes in which the community people would have exclusive rights over its resource and would enjoy true democracy.