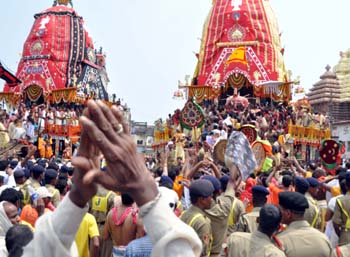 Odisha Channel Bureau Bhubaneswar, Aug 11: Union Ministers Jual Oram and Dharmendra Pradhan met Union Road Transport & Highways Minister Nitin Gadkari in New Delhi on Monday and requested him to expedite the National Highway projects between Bhubaneswar and Puri, and Puri and Bhubaneswar via Konark along with renovation of Jagannath Sadak.The two BJP leaders from Odisha who met Gadkari emphasised the need for timely completion of the projects in view of the Nabakalebara festival of Lord Jagannath scheduled to be held in Puri next year.Nabakalebara is an ancient ritual associated with Jagannath Culture when the Idols of Lord Jagannath, Balabhadra, Subhadra and Sudarshan are replaced by a new set of Idols.Next ceremony will be held in 2015 after 19 years.Millions of pilgrims from different parts of the country and abroad are expected to visit Puri during the Nabakalebara in 2015.This will have a good impact on Odisha’s cultural and tourism landscape.In the hope of more than three million devotees will be visiting, Oram and Pradhan also requested to Gadkari to make multi-purpose parking, shopping complex, restaurants and toilets along these highways.These projects will help the pilgrims during festival as well as local residents of Puri to get opportunity for employment, they said.The delegation has also met Minister of State for Culture & Tourism Shripad Yesso Naik and discussed about Nabakalebara ritual of Jagannath Temple and stressed the issue of development of culture and tourism sector in the area so as to make the function a grand success.