Shah wants BJP to be strengthened in Odisha: Patra 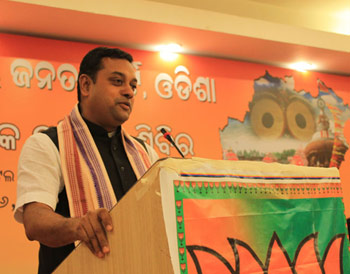 Odisha Channel Bureau Puri, Sep 6: Bharatiya Janata Party’s national spokesperson Sambit Patra on Saturday said that party’s national president Amit Shah wants the party to be strengthened in Odisha.Addressing party leaders of Odisha unit of the BJP at a State level training camp, Patra urged the gathering to launch a statewide campaign about 100 days of success of the Central Government headed by Prime Minister Narendra Modi.Patra also underlined the need for highlighting the failures of the Naveen Patnaik Government across the State.BJP national secretary Shyam Jaju, who also addressed the gathering of leaders at the training camp, stressed the need for effective media management in order to make the party emerge stronger in Odisha.Odisha BJP has organised the three-day-long camp starting from Friday to strengthen the party organisation and prepare the party leaders to win the future elections in the State.The party leaders have also planned to organise training camps at the district and Block levels in the near future to strengthen the organisation at the booth level across Odisha.